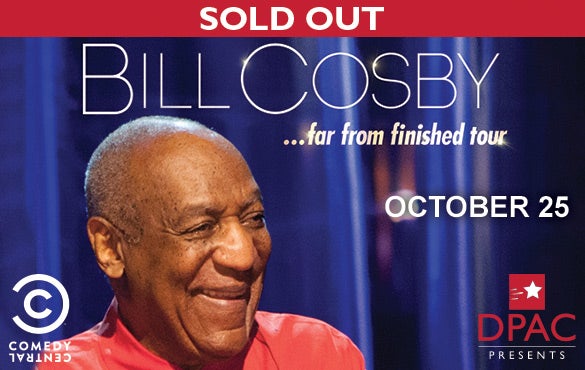 One of America’s most beloved comedians of all time, Bill Cosby, whose comedy transcends age, gender and cultural barriers, is making a rare appearance at DPAC on Saturday, October 25. Cosby returns to DPAC in his new Comedy Central “Far From Finished Tour,” following multiple sellout performances on previous tours in 2009 and 2012.

Bill Cosby broke television’s racial barrier with I Spy, becoming the first African American to co-star on a television series while winning three consecutive Emmys. He created and produced the Emmy®-winning cartoon Fat Albert and the Cosby Kids, which began airing in the 1970s and was made into a film in 2004. The show, based upon Cosby’s childhood in Philadelphia, was designed to educate and entertain.

Cosby has received the Kennedy Center Honors, the Presidential Medal of Freedom (America’s highest civilian honor), the Mark Twain Prize for American Humor and the Marian Anderson Award. Among his many awards for his stand-up comedy albums are five Grammy Awards®, eight Gold and five Platinum records.

Perhaps Cosby’s greatest contribution to American entertainment and culture is The Cosby Show, about a close-knit, upper class black family. Cosby said his intent was to portray an American family. Time magazine called the show “an encouraging sign of maturity in matters of race.” The Cosby Show dominated the No. 1 spot for years, earning nearly unanimous critical praise. Life magazine described the program as “a gentle, whimsical, warmhearted” show whose “delicious ordinariness of its pleasures and tribulations has given millions a fresh, laughter-splashed perspective on their own domestic lives.”

Sold Out. Please email us at [email protected] if you would like to be placed on our waiting list if any seats are returned or released before the event.