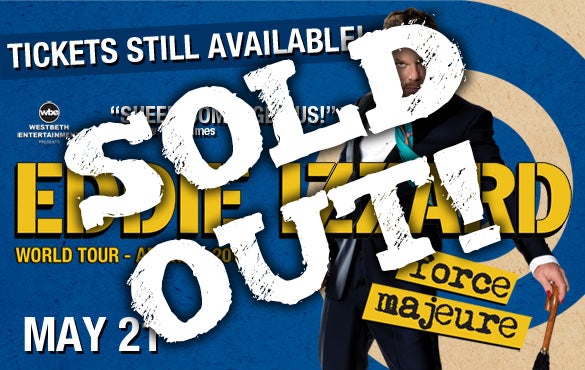 The man the London Sunday Times calls “the greatest British stand-up comedian of his generation” returns to America with his World Tour “Force Majeure.”

Eddie Izzard - the man who turned talking ‘bollocks’ into an art form…..

“Sheer comic genius. His humor reflects the scattershot lunacy of Monty Python, but with flashes of Robin Williams’s manic energy and a sophisticated silliness that is entirely his own. He is the most brilliant stand-up comedian of his generation.” - The New York Times

“Hilarious! He has the acid snap of a white Richard Pryor, merged with all the Monty Pythons at once.” - Toronto Star

"He walks onstage to the roaring tumult usually reserved for rock stars and soon has the audience busting a gut about the Spanish Inquisition and chaos theory. Such is the phenomenon of Eddie Izzard, funniest man, in, well, pretty much all of the known universe."  - The LA Times

Sold Out. Please email us at [email protected] if you would like to be placed on our waiting list if any seats are returned or released before the event.