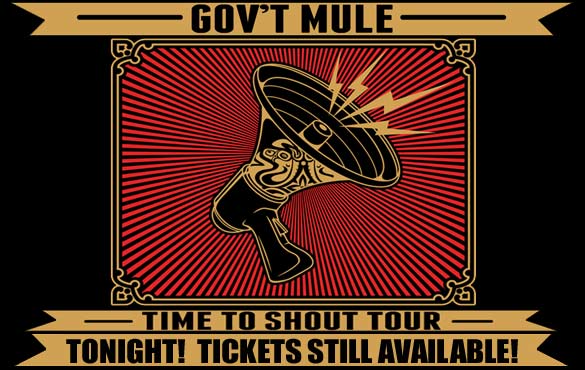 Gov’t Mule have announced a series of Winter tour dates in support of their new album, Shout!. Gov't Mule formed in 1994 by singer-songwriter and guitarist Warren Haynes and bassist Allen Woody of The Allman Brothers Band.

Few bands have a reputation for making music as consistently honest, organic and daring as Gov't Mule. They're the rare rock ‘n' roll group with an improvisational heartbeat, which allows all four musicians to expand on the songs' themes in non-formulaic ways. That quality distinguishes the finest jazz, blues and rock recordings of the '50s and '60s, but is largely absent in modern music.

Blue Note Records president Don Was sums up Gov't Mule's place in contemporary music: "The Mule holds a unique and lofty berth. They have roots that run real deep - drawing from the entire history of rock ‘n' roll going all the way back to Robert Johnson and the Delta….According to the Blue Note manifesto written by our founder Alfred Lion back in 1939, our label is dedicated to the recording of ‘authentic music.' I don't know how much more authentic you can be than Gov't Mule! It's an honor to release their records on the Blue Note label. On this new album, they've elevated their songwriting, playing and production values to a whole new plateau. It's gonna blow people's minds!"

Add the word "again," because Gov't Mule have been blowing minds since their eponymous 1994 debut. That album found the band boldly transfusing new blood into old-school psychedelic blues-rock at a time when the genre was largely ignored. Gov't Mule's stylistic grasp has grown inexhaustibly since. Fighting the trend in a declining music industry, the band's fan base, too, has steadily expanded over the course of 15 studio and live releases and thousands of performances - at first in small clubs and theaters, then at halls and major international festivals.