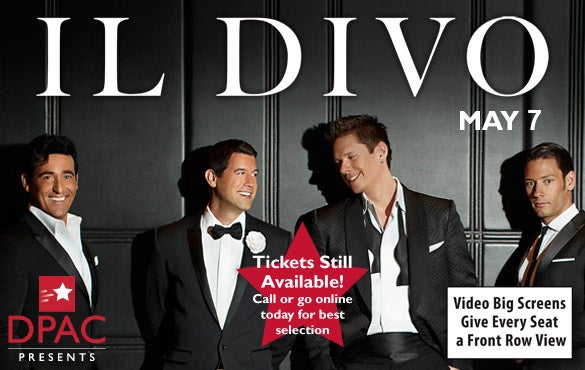 IL DIVO, the world's foremost classical crossover quartet, brings their new Best of Il Divo tour  to the Triangle for the first time on May 7. This new show features Il Divo performing their signature classical interpretations of popular songs across their whole career catalogue with a full orchestra.

Il Divo – featuring multinational members Urs Buhler, Carlos Marin, David Miller and Sebastien Izambard – have sold over 26 million albums, enjoyed over 50 number ones and chalked up 160 gold and platinum sales in over 33 countries. Proving the lack of geographical boundaries to their romantic and timeless repertoire, Il Divo have become a global touring phenomenon. Their 2012 fourth world tour saw them perform an incredible 134 shows across 46 countries on 6 continents.

Their amazing career knows no bounds. Highlights include appearing at the opening and closing ceremony of the 2006 Fifa World Cup, touring as special guests to Barbra Streisand, a 2009 performance at President Obama’s Purple Inauguration Ball and recently at a special concert for Her Majesty Queen Elizabeth’s Diamond Jubilee at Windsor Castle.

Many of the tracks for the new Best of Il Divo show have been chosen by their fans all over the world and will include favourites ‘Somewhere’, ‘Unbreak My Heart’, ‘Unchained Melody’ and ‘Adagio’ as well as several new songs such as ‘My Heart Will Go On’ (in Italian), ‘I Will Always Love You’ (in Spanish) and ‘I Can’t Help Falling In Love With You’ (English) from their recent global Greatest Hits album release.