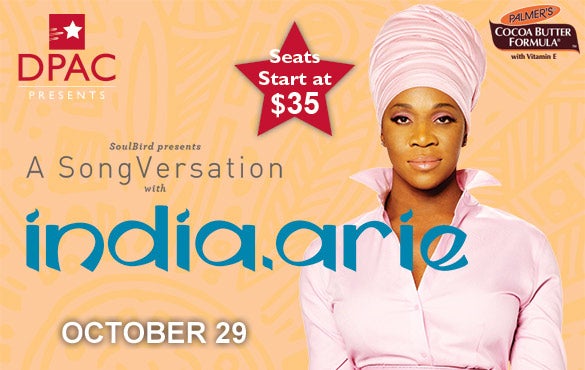 2013 continues to be a very busy year for India.Arie. The Soulbird Presents A SongVersation with India.Arie 2013 North American tour comes in support of India’s acclaimed fifth studio album SongVersation (Soulbird/ Motown Records) which released June 25th, received rave reviews and marks her fifth #1 on the Billboard R&B Album Chart and fifth top 10 debut on the Billboard Top 200. In addition to prepping for the US tour, India has made a number of recent national television appearances in support of SongVersation on shows including Good Morning America, The Tonight Show with Jay Leno, BET Awards and a two-episode special on Oprah Winfrey’s Super Soul Sunday.

World-renowned award-winning singer-songwriter India.Arie came onto the national music scene in 2001 with her Motown Records debut ACOUSTIC SOUL. She followed up in 2002 with her sophomore release VOYAGE TO INDIA and then in 2006 released her third album, the more personally expressive TESTIMONY: Vol. 1, LIFE & RELATIONSHIP. TESTIMONY VOL. 2, LOVE AND POLITICS, her fourth studio album, released in 2009. All four releases received critical acclaim and made India a highly respected and noted artist in a very short amount of time. She has sold an impressive 10 million albums worldwide and has received numerous awards and nominations including a staggering 21 Grammy® nominations, 4 Grammy® Awards, 3 NAACP Image awards, as well as awards from BET, Billboard, MTV, VH1, Vogue Fashion, Essence Magazine and others.

In between touring and writing music, India also finds the time to help promote causes close to her heart. She is an avid supporter of female empowerment, and is a US Ambassador for UNICEF. India recently formed SoulBird, a new lifestyle company with the mission to spread love, healing, peace and joy through the power of words and music.