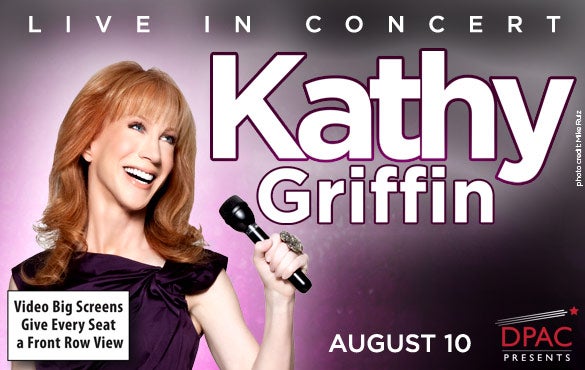 Two-time Emmy® winner and bestselling author, Kathy Griffin will be performing on August 10 at DPAC, Durham Performing Arts Center. This special live comedy event is presented by DPAC and the Carolina Theatre, as headlining event of the North Carolina Gay and Lesbian Film Festival (NCGLFF).

VIP Passes for the NC Gay and Lesbian Film Festival will include a premium seat to Kathy Griffin at DPAC. The film festival’s VIP passes go on sale Friday, May 4 through the Carolina Theatre Box Office. Availability is limited.

Kathy Griffin is a multi-faceted performer with rapid fire wit. She is a two-time Emmy® winner, for "Kathy Griffin: My Life on the D-List", NY Times bestselling author, with her tell-all autobiography entitled, "Official Book Club Selection: A Memoir According to Kathy Griffin," Grammy® nominee, for her comedy albums "For Your Consideration,” "Kathy Griffin Does the Bible Belt" and “Kathy Griffin: 50 and Not Pregnant.” She has been making audiences laugh for years discussing Hollywood gossip and celebrity blunders.

Kathy is very involved with the gay and lesbian community and was presented with the prestigious Vanguard Award at the 2009 GLAAD Media Awards. The Trevor Project awarded Kathy with Lifetime Honoree status at the 2011 gala for her tremendous work with the GLBTQ community. Kathy won the 2009 Gracie Award for Outstanding female lead in a Comedy Series. She was the 2007 GAVYN Awards Honorary Gay, the recipient of the 2006 Ladies Home Journal Funny Ladies We Love Award and in 2005 she received the Lambda Legal Liberty Award. Other honors include 2003 Toys for Tots Commander's Award, Women's Night Special Comedic Award, Lucie Award, 2005 Aid for AIDS Friend of the Year and in 2007 was voted one of the Top 100 Irish Americans in Irish American Magazine. Kathy has also been nominated four years in a row for the Television Producer of the Year in Non-Fiction Television PGA Award.

(Set times are approximate, and subject to change.)