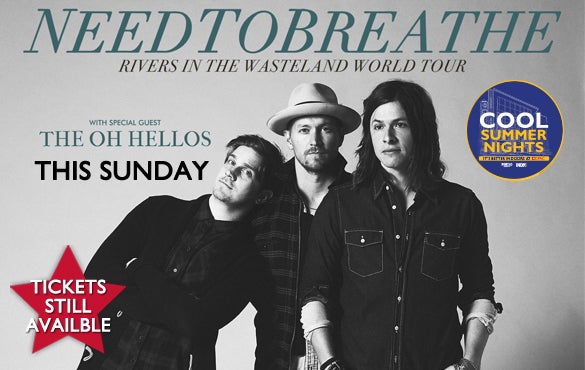 With their reputation as a must-see live act built from non-stop touring over the past decade, South Carolina natives NEEDTOBREATHE open a new chapter in their story with the release of their fifth studio album, Rivers in the Wasteland, Out April 15.  Along with supporting act The Oh Hellos, NEEDTOBREATHE’s Rivers in the Wasteland World Tour will make a stop for one night only at DPAC on Sunday, August 24, 2014.

NEEDTOBREATHE followed up the success of their fourth album The Reckoning, which hit No. 1 on the Billboard Rock Albums Chart and No. 6 on the Billboard Top 200, with relentless touring, crisscrossing the country on multiple headlining tours, playing standout sets at major festivals like Bonnaroo and Austin City Limits and performing throughout Europe. With their first four albums selling in the hundreds of thousands, they describe the start of their most recent work, Rivers in the Wasteland, as a desire to return to the band’s roots and find the anchor of musical simplicity.

“We had a few goals as a band for the album,” says front man Bear Rinehart. “I had them written in my notebook while I was writing songs. They were really basic: keep it simple, not too many instruments, and have fun with it. And the last one was: be ourselves. Probably 90 percent of the record is live takes.”
For a commentary on each track in the new album visit SPOTIFY.

CHARITY: $1 from every ticket sold will go to benefit the Palmetto Medical Initiative.