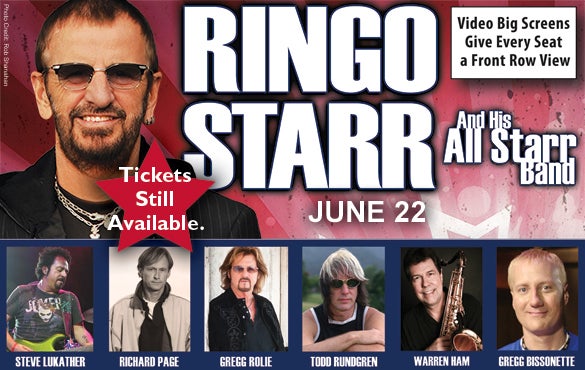 Ringo Starr & His All Starr Band

Straight from winning the Grammy® Lifetime Achievement Award, one of two surviving Beatles members Ringo Starr is set to return to the DPAC stage June 22 performing live with his All Starr Band. In addition to one of the world’s brightest musical luminaries Ringo Starr, his band includes acclaimed musicians Steve Lukather of Toto, Richard Page of Mr. Mister, Gregg Rolie of Santana and Journey, Todd Rundgren, Warren Ham and Gregg Bissonette. For his performance at DPAC, Ringo will perform a number of his hits from The Beatles plus songs from his All Starr bandmates.

Since beginning his career with The Beatles in the 1960s, Ringo Starr has enjoyed a successful and dynamic solo career as artist, singer, songwriter and drummer, an active musical collaborator, and as an actor. Drawing inspiration from classic blues, soul, country, honky-tonk and rock ’n’ roll, Ringo continues to play an important role in modern music with his solo recording and touring.