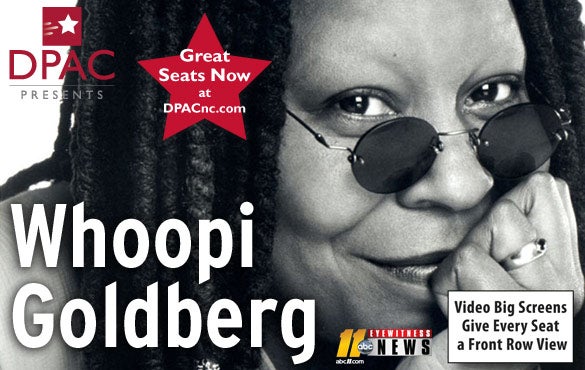 Multifaceted Whoopi Goldberg will take a break from moderating ABC’s The View to make a rare stop at DPAC, Durham Performing Arts Center on January 25, 2013. She will perform her stand-up comedy followed by a question and answer session with audience members, moderated by ABC11 Eyewitness News anchor Tisha Powell.

Whoopi is equally well known for her humanitarian efforts on behalf of children, the homeless, human rights, education, substance abuse and the battle against AIDS, as well as many other causes and charities. Ms. Goldberg is a Goodwill Ambassador to the United Nations. She has been honored with multiple NAACP Image Awards, numerous People's Choice Awards (including a special tribute in 1998) and five Nickelodeon Kids' Choice Awards as Favorite Movie Actress, as well as various awards and honors for her many humanitarian efforts.