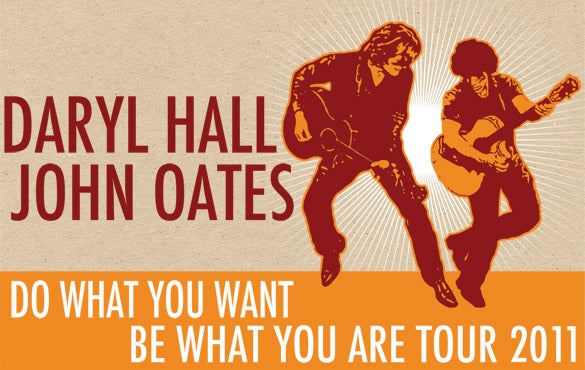 Tickets start at $48.50*. Friends of DPAC members may place their orders on Wednesday, September 21st. Joining the Friends of DPAC is free, and you can register at www.DPACnc.com/friendofdpac. Fans should check local listings for updated tour and ticketing information.

"Daryl Hall and John Oates have been on our 'bucket list' of special shows ever since DPAC opened its doors. To land this special and rare concert appearance for the Triangle is just incredible. I expect this to be another night that adds to DPAC's growing legacy of hosting legendary concert superstars," said Bob Klaus, GM of DPAC.

From their first hit in the early '70s through their meteoric rise in the '80s, Daryl Hall and John Oates' unique take on Philly soul brought them enormous commercial success -- including six platinum albums. Daryl Hall and John Oates started working together in the early 1970’s and went on to become the most successful duo in rock history. Meeting in a freight elevator while escaping a riot at the Aldephi Ballroom during the club’s legendary Battle of the Bands, they would join forces to become the pioneers of Rock & Soul. With over 60 million albums sold, Daryl Hall and John Oates' rich repertoire has garnered a total of 8 #1 hit singles along with dozens of hits throughout the 70’s, 80’s, 90’s, including "Do It For Love," “Rich Girl,” “Kiss On My List,” “Maneater,” “Private Eyes,” “I Can’t Go For That (No Can Do), “Sara Smile,” “She’s Gone,” and “One On One." Recently the duo was named in VH1's top 100 artists of a all time.

About DPAC
The Durham Performing Arts Center is a 2,700 capacity multi-use theatre that features the hottest Broadway and family shows, high-profile concerts and incredible special events. Listed four times in the top 50 in Pollstar magazine’s Top Theater Venues, and currently ranked #2 in US Theaters. DPAC has become a beacon of energy in the Triangle and the region’s new home for world-class live entertainment. Operated under the direction of Nederlander and PFM, DPAC is also home of the SunTrust Broadway Series with over 10,000 season ticket holders and show stopping Broadway engagements of Hair and Radio City Christmas spectacular starring The Rockettes and much, much more. For more information please go to www.DPACnc.com.