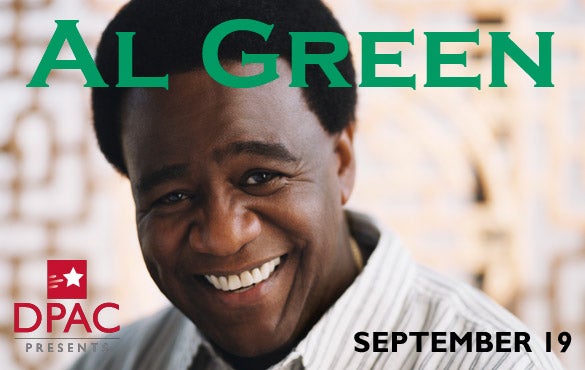 "Our stage has hosted musical legends since we opened, and we’re keeping our track record strong with an appearance by Al Green. DPAC audiences will be treated to excellent sightlines and perfect acoustics for this R&B superstar, and the memories he’ll evoke will last a lifetime," said Bob Klaus, GM for DPAC.

The Reverend Al Green is known the world over for his extraordinary voice and legendary hits that include “Let’s Stay Together”, “I’m Still in Love with You”, “Tired of Being Alone”, and "Take Me To The River". In 2005, Rolling Stone magazine named him #65 on their “100 Greatest Artists of All Time”. Green has sold more than 20 million records, has earned 11 GRAMMY Awards, and was inducted into the Rock and Roll Hall of Fame in 1995.

Green’s latest release Lay It Down was conceived as a collaboration between the soul legend and a handful of gifted young admirers from the worlds of contemporary R&B and hip hop. The album is drawn from a series of inspired sessions that yielded the most high-spirited, funky and often lushly romantic songs of Green’s latter-day career. The album is a refreshingly old school jam, with everyone laying down the music together, face to face, heart to heart, soul to soul.

The project features the sophisticated R&B voices of singer-songwriters John Legend, Anthony Hamilton and Corinne Bailey Rae, and was co-produced with Green by two of hip-hop’s most innovative players, drummer Ahmir “?uestlove” Thompson from the Roots and keyboardist James Poyser, the go-to guy for high-profile artists ranging from Erykah Badu to Common. Add in Brooklyn’s celebrated Dap-King Horns (Sharon Jones, Amy Winehouse), guitarist Chalmers “Spanky” Alford (Mighty Clouds of Joy, Joss Stone) and bassist Adam Blackstone (Jill Scott, DJ Jazzy Jeff), among others, and you’ve got a modern soul-music dream team, fronted by the most expressive voice in the business.