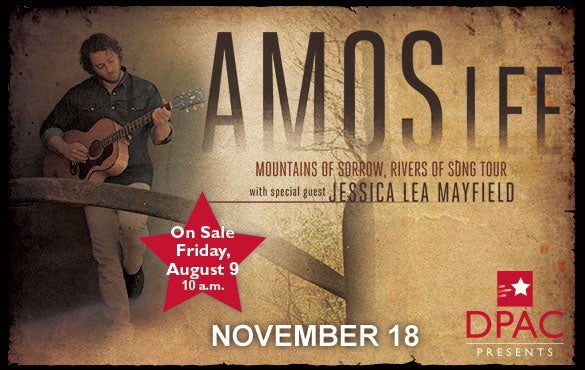 
August 5, 2013 (Durham, NC) — Amos Lee will tour the U.S. this fall in support of his fifth studio album, Mountains Of Sorrow, Rivers Of Song, which will be released on October 8 by Blue Note Records. The headline run will make a stop at DPAC, Durham Performing Arts Center, on November 18, 2013.

Lee will donate $1 from each ticket sold for the November tour to Musicians On Call, a non-profit organization that brings live and recorded music to the bedsides of patients in healthcare facilities. In his ongoing effort to support Musicians On Call, Lee will be running a donation-based contest to win an autographed guitar. For more information on the contest, visit http://www.amoslee.com/tour.

Tonight Lee will perform “The Man Who Wants You,” the first single from Mountains Of Sorrow, Rivers Of Song, on ‘The Tonight Show with Jay Leno.’ The track premiered on EW.com today and is streaming now. "The Man Who Wants You" impacts Triple A radio today, but over 50 stations added the song in advance, resulting in an early chart debut. This week it moves up to #27 on the Triple A radio chart.

Special guests on the album include vocalists Alison Krauss and Patty Griffin and instrumentalists Jerry Douglas (Alison Krauss & Union Station), Mickey Raphael (Willie Nelson and Family) and Jeff Coffin (Dave Matthews Band). The album is the first to feature Lee’s longtime touring band – comprising Freddie Berman, Zach Djanikian, Andy Keenan and Jaron Olevsky – which will be joining him on the road this fall. Lee will perform solo at Farm Aid (September 21) and the Life is Good Festival (September 22).

Mountains Of Sorrow, Rivers Of Song is the follow-up to 2011’s Mission Bell, which debuted at No. 1 on the Billboard 200 and Billboard Rock Albums charts and contained the No. 1 Triple A radio hit “Windows Are Rolled Down.” “His soulful singing charms throughout,” said Entertainment Weekly and USA Today awarded the album four stars out of four. "Amos Lee has a honeyed singing voice - light amber, mildly sweet, a touch of grain,” observed The New York Times while The Philadelphia Inquirer noted, “Lee hits his personal best.”

About Musicians On Call

Musicians On Call is a non-profit organization (founded in 1999) that brings live and recorded music to the bedsides of patients in healthcare facilities, in order to complement the healing process for patients, families, and caregivers. To date, its volunteers have played for over 350,000 individuals nationwide. Musicians On Call continues its mission through room-to-room hospital performances by both local and internationally renowned musicians as well as the Music Pharmacy Program. Forty-two weekly Bedside Programs are currently provided in New York, Los Angeles, Nashville, Miami, Philadelphia, and Washington DC. www.musiciansoncall.org/amos

About DPAC
Since its opening in 2008, DPAC, Durham Performing Arts Center, has become the center for live entertainment in the Triangle. Recognized for its contemporary design, DPAC features 2,700 seats, intimate sightlines and state-of-the art sound and video. Listed four times in the top 10 in Pollstar magazine’s annual worldwide theater attendance rankings, DPAC is currently the #3 ranked theater in the U.S.