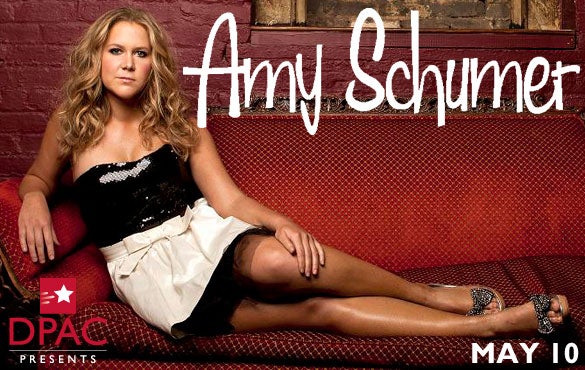 Amy Schumer Comes to DPAC, May 10

Durham, NC – Live Nation welcomes AMY SCHUMER to DPAC, Durham Performing Arts Center, on May 10, 2013 at 8:00 p.m. Amy Schumer is quickly becoming the hottest star in the world of comedy, with her blend of wholesome, girl-next-door looks and edgy comedy. Amy is the creator, star and writer of Inside Amy, her Comedy Central television show which will premiere next year. Amy is coming off her one-hour stand-up special, Mostly Sex Stuff, which became Comedy Central’s second-highest rated special this year. She was one of the featured comedians on Comedy Central’s Roast of Roseanne, following her breakout performance on last year’s Roast of Charlie Sheen. Amy was most recently on Louie and will next be seen in Season 2 of HBO’s Girls.

Amy recurred on Season 3 of Adult Swim’s Delocated and guest starred in the latest season of Curb Your Enthusiasm. Last year she filmed the feature Seeking a Friend for the End of the World starring Steve Carrell and Kiera Knightley and Price Check, an independent feature opposite Parker Posey which premiered at this year’s Sundance Film Festival. Her album Cutting placed in the top 5 of the Billboard Charts and has been included on multiple Best Comedy Albums of the Year awards’ lists.

Amy made her network debut in 2007 on NBC’s Last Comic Standing and soon after co-starred on 30 Rock, had her own Comedy Central Presents special. She co-hosted Hoppus on Music with Mark Hoppus of Blink 182 on Fuse and this summer made her fourth appearance at the Montreal Comedy Festival.