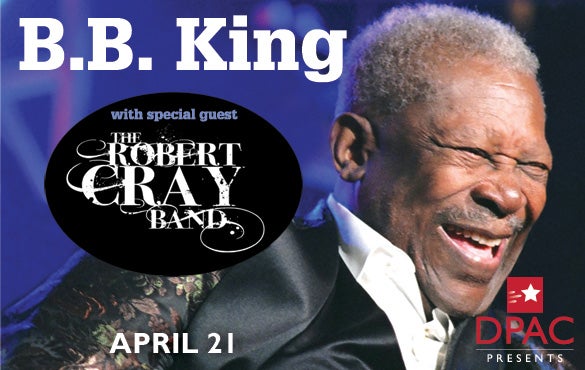 November 16, 2012 (Durham, NC) – Next spring DPAC, Durham Performing Arts Center, welcomes back for the third time the most legendary bluesman to ever pick up a guitar, B.B. King with special guest Robert Cray on April 21, 2013. During B.B. King’s last two performances at DPAC, the King of the Blues played to adoring, sold-out crowds. Fans can expect tickets to go fast for the blues event of the year featuring these two Grammy® Award-winning artists.

"DPAC has become the home of the Blues in the Triangle and we love hosting one of a kind events like this return of the legendary BB King for his third DPAC appearance. It's well known that the acts we host love the intimate setting and state of the art DPAC sound and BB's return is also a testimony to his love of Triangle Blues audiences. With this year's addition of very special guest Robert Cray, this will no doubt be the blues event of the year," said Bob Klaus, GM for DPAC," said Bob Klaus, GM for DPAC.

His reign as King of the Blues has been as long as that of any monarch on earth. Yet B.B. King continues to wear his crown well. For more than half a century, Riley B. King - better known as B.B. King - has defined the blues for a worldwide audience. At age 87, he is singing and playing the blues with relentless passion. Time has no apparent effect on B.B., other than to make him more popular, more cherished, more relevant than ever. B.B. King is as alive as the music he plays, and a grateful world can't get enough of him.

Robert Cray has been known as one of the most popular artists in blues and soul music, since his breakthrough album Strong Persuader in 1986. His soulful and creative guitar work has been a dominant force in blues. Blues fans will not want to miss this performance by these two Blues Hall of Famers.