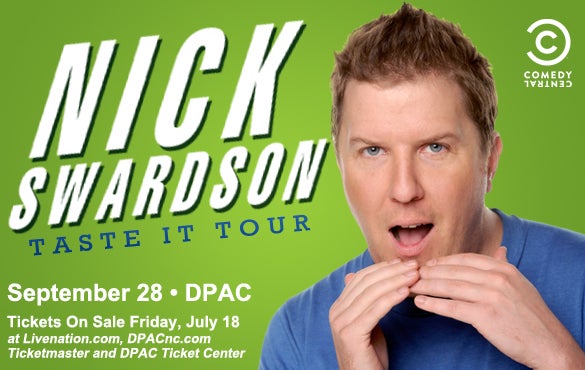 Live Nation welcomes NICK SWARDSON to DPAC, Durham Performing Arts Center, on Sunday, September 28, 2014 at 7:30 p.m.  Every so often, a comedian comes along who emerges as a triple threat: comedian, actor and writer/producer. Nick Swardson is one of the most exciting artists to have taken on this role. He is best known for his recurring role as Terry Bernadino in the comedy series Reno 911!, and this fall, he'll be embarking on his "Taste It" tour with tickets going on sale July 18, 2014 at 10:00 AM. Nick's 40+ date tour will wrap with a live Comedy Central special in Austin, Texas.

Tickets go on sale Friday, July 18 at 10 a.m. at Livenation.com, DPACnc.com, Ticketmaster.com, and the DPAC Ticket Center 919.680.2787. All tickets subject to applicable service charges and fees. Dates and times subject to change without notice.

The road to success has been a steady climb for Swardson, who started his career in St. Paul/ Minneapolis, then on to New York and Los Angeles, where he first struck feature success in writing "Malibu's Most Wanted" for Warner Brother Studios, which starred Jamie Kennedy. After catching the attention of Happy Madison Productions, he quickly became a fixture in the company, writing or co-writing and producing such projects as "Grandma's Boy," "Benchwarmers" and co-producing "I Now Pronounce You Chuck and Larry" with Adam Sandler and Kevin James. More recently Nick has performed in movies such as “That’s My Boy,” “Blades of Glory,” “30 Minutes or Less,” and “Bucky Larson: Born to Be a Star,” which he wrote, acted, and produced. His first CD/DVD, "Party", on Comedy Central Records (produced by Happy Madison) went Platinum, which he followed up in 2010 with his first one-hour stand-up special on Comedy Central, “Seriously who Farted.”

In addition to his career in film and in the world of stand-up comedy, Nick continues to have a prolific career in television. His Comedy Central sketch show, "Pretend Time with Nick Swardson” ran from 2010 to 2012, and this past year he voiced the role of TROY on FXX’s animated show, CHOZEN. Nick is currently shooting the feature film, “Pixels,” from Columbia Films, starring Adam Sandler and Josh Gad.

About DPAC
Since its opening in 2008, DPAC, Durham Performing Arts Center, has become the center for live entertainment in the Triangle. Recognized for its contemporary design, DPAC features 2,700 seats, intimate sightlines and state-of-the art sound and video. Listed four times in the top 10 in Pollstar magazine’s annual worldwide theater attendance rankings, DPAC is currently the #4 ranked theater in the U.S.
For more information please go to www.DPACnc.com.