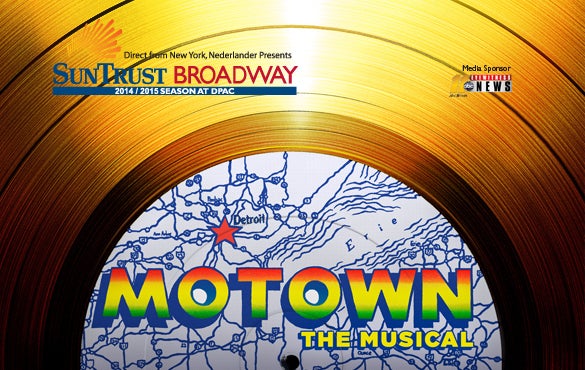 Producers Kevin McCollum, Doug Morris and Berry Gordy are proud to announce the complete cast for the First National Tour of MOTOWN THE MUSICAL. The tour opens at the Oriental Theatre in Chicago, IL with performances beginning on April 22, 2013. MOTOWN THE MUSICAL will take the stage at DPAC from February 17 through 22 as part of the SunTrust Broadway at DPAC, 2014 / 2015 Season.

Tickets for MOTOWN THE MUSICAL at DPAC are currently available as part of the SunTrust Broadway, 2014 / 2015 Season package. Prices for the season will vary depending on titles and seats selected, and whether choosing the full eight-show or flexible seven-show package. Tickets for individual shows will go on sale this summer and fall. For more information on SunTrust Broadway at DPAC benefits, visit SunTrustBroadway.com.

Directed by Charles Randolph-Wright, MOTOWN THE MUSICAL is the true American dream story of Motown founder Berry Gordy’s journey from featherweight boxer to the heavyweight music mogul who launched the careers of Diana Ross, Michael Jackson, Stevie Wonder, Smokey Robinson, Marvin Gaye and so many more.

Featuring more than 50 classic hits such as “My Girl” and “Ain’t No Mountain High Enough,” MOTOWN THE MUSICAL tells the story behind the hits as Diana, Smokey, Berry and the whole Motown family fight against the odds to create the soundtrack of change in America. Motown shattered barriers, shaped our lives and made us all move to the same beat.