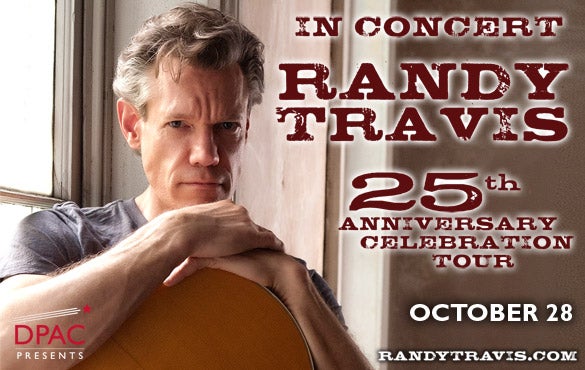 "I first saw Randy Travis from nearly the top row in the Dean Smith Center, and though the stage seemed like a million miles away, he filled the arena with a warmth and authenticity that is rare in country music," said Bob Klaus, GM of DPAC. "To now be hosting this legend at DPAC is so special. Triangle country music fans should treasure this chance to be part of a rare and unique live performance with one of country's all time superstars."

With lifetime sales in excess of 20 million, Randy Travis is one of the biggest country record sellers of all time. His honors include seven GRAMMY® Awards, 10 Academy of Country Music statuettes, 10 American Music Awards, two People’s Choice awards, seven Music City News awards, eight Dove Awards from the Gospel Music Association and five Country Music Association honors. In addition, three of his performances earned CMA Song of the Year honors, “On the Other Hand” (1986), “Forever and Ever, Amen” (1987) and “Three Wooden Crosses” (2003).

To date, he has 18 No. 1 singles, 29 top-10 smashes and more than 40 appearances in feature films and television shows to his credit. Ten of his albums are Gold Records, eight are Platinum; two have gone Double Platinum, one more is Triple Platinum and another is Quintuple Platinum. In 2004, Randy was honored with his own star in the Hollywood Walk of Fame. He has been a member of the Grand Ole Opry since 1986.