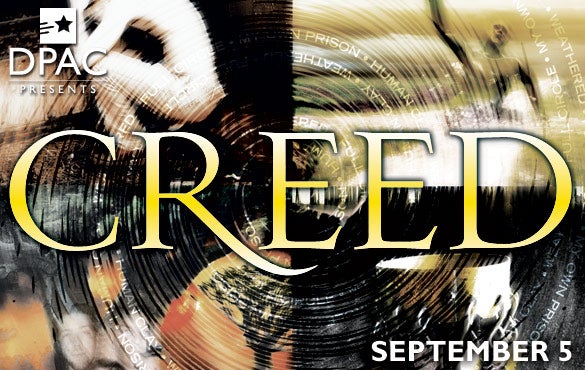 July 9, 2012 (Durham, NC) — Creed to perform at DPAC, Durham Performing Arts Center on September 5, 2012. The band will play a series of shows across the country in small intimate settings where they will perform My Own Prison and Human Clay in their entirety. 2012 marks the 15-year anniversary of their first album, My Own Prison.

"I sometimes think fans have forgotten that this was one of the biggest rock bands in the world from 1998 to 2004. They sold 53 million CD's worldwide and thefact that they are back together and making great music again is fantastic.Hosting Creed in DPAC's intimate 2,700 seat center for live entertainment, fits perfectly with DPAC's mission of presenting one-of-a-kind concert events," said Bob Klaus, GM for DPAC.

Since their formation in 1995, Tallahassee natives Scott Stapp (vocals), Mark Tremonti (guitar), Brian Marshall (bass) and Scott Phillips (drums), better known as Creed, have gone on to be one of the most successful bands in rock history, selling close to thirty-five million albums and millions of concert tickets. The band’s debut, My Own Prison, was released in 1997 and has sold over six million copies in the U.S. The follow-up, 1999’s Human Clay, has been certified Diamond for sales in excess of 11 million copies. The band’s third studio album, Weathered, was released in 2001 and tied The Beatles Anthology for the most consecutive weeks at Number One on Billboard’s Top 200 chart (eight weeks since the beginning of the SoundScan era in 1991). In November 2004, Creed’s Greatest Hits was released, and was certified double platinum. The band’s most recent studio album, 2009’s Full Circle, featured the top 10 rock radio hit “Overcome.” The songwriting team of Stapp and Tremonti are considered one of the most prolific in rock history. The band was voted Favorite Group in 2003 on the People’s Choice Awards and has won numerous American Music Awards, Billboard Music Awards and others including the Grammy Award for best Rock Song in 2001 for “With Arms Wide Open.” For more information visit www.creed.com.