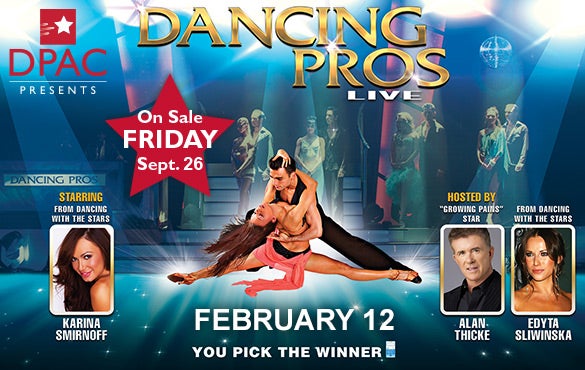 DANCING PROS: LIVE! Will Dance into DPAC on February 12

September 15, 2014 (Durham, NC) – Dancing Pros: Live! will dance into town and thrill audiences at DPAC, Durham Performing Arts Center, on February 12, 2015. The world’s finest dancers will battle it out on stage and the audience will choose the winner! Starring Karina Smirnoff and Edyta Sliwinska, both from “Dancing with the Stars,” this unforgettable live dancing competition is hosted by Alan Thicke, star of the hit TV show “Growing Pains.”

Friends of DPAC members may place their orders starting September 25. Joining Friends of DPAC is free, and you can register at http://www.dpacnc.com/fod.

For the first time together on stage, audiences across the country will see professional dancers from “Dancing with the Stars,” “So You Think You Can Dance” and dance champions from around the world compete with one another for top prize! Watch in awe as they perform a variety of dance styles including Cha-Cha, Waltz, Tango, Swing, Freestyle Samba and the Jitterbug. Using electronic voting remotes, the audience will become part of the show and vote for their favorite couple. Unlike reality TV shows, there is no waiting until next week for results; the winning couple is announced at the end of the show!

Audiences will be dazzled by amazing caliber celebrity and professional dancers, singers from “American Idol” or “The Voice,” a glamorous set, stunning costumes, group numbers and unbelievable dance moves! From high voltage kicks to seductive strides, these famed competitors demand everyone's attention as they rival one another on the dance floor for a chance to win the vote!

People magazine hailed “Top notch dancing from the best in the world and a live fan vote for the winner. If you like “Dancing with the Stars,” you’ll love the drama, excitement and unpredictability of Dancing Pros.”

Additional information about Dancing Pros: Live! is available at www.DancingProsLive.com.


ABOUT DPAC:
Since its opening in 2008, DPAC, Durham Performing Arts Center, has become the center for live entertainment in the Triangle. Recognized for its contemporary design, DPAC features 2,700 seats, intimate sightlines and state-of-the art sound and video. Listed four times in the top 10 in Pollstar magazine’s annual worldwide theater attendance rankings, DPAC is currently the #3 ranked theater in the U.S.

What is up next at DPAC? Superstar Comedian from Comedy Central’s Reno 911 NICK SWARDSON (September 28), The Best of JETHRO TULL performed by IAN ANDERSON (October 4), and Singing Sensation SUSAN BOYLE on Her First American Tour (October 29).