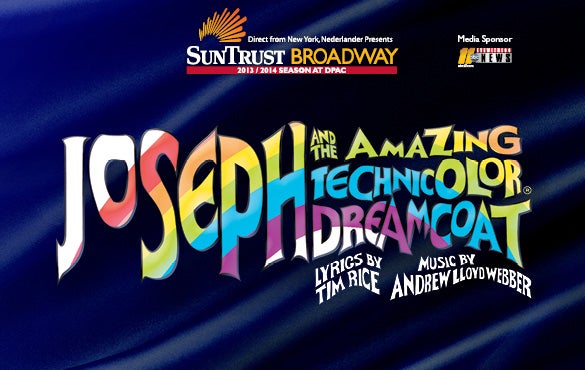 The Independent Presenters Network is delighted to announce that Broadway and television star Diana DeGarmo and Broadway star Ace Young will head up the cast of the new touring production of JOSEPH AND THE AMAZING TECHNICOLOR DREAMCOAT. The new tour will launch at Playhouse Square in Cleveland, OH, on March 4, 2014.

JOSEPH AND THE TECHNICOLOR DREAMCOAT will play at DPAC for a limited engagement from May 13 through 18 as part of the SunTrust Broadway at DPAC, 2013 /2014 Season. Tickets for the show will go on sale on Friday, September 13 at noon.

One of the most enduring shows of all time, JOSEPH AND THE AMAZING TECHNICOLOR DREAMCOAT is the irresistible family musical about the trials and triumphs of Joseph, Israel’s favorite son. The first collaboration of Andrew Lloyd Webber (Jesus Christ Superstar, Phantom of the Opera, Cats) and Tim Rice (Jesus Christ Superstar, The Lion King), JOSEPH blends pop, country and rock into an uplifting, technicolored story of biblical proportions.
Retelling the Biblical story of Joseph, his eleven brothers and the coat of many colors, this magical musical is full of unforgettable songs including Those Canaan Days, Any Dream Will Do and Close Every Door.
Performances for JOSEPH AND THE AMAZING TECHNICOLOR DREAMCOAT will run the following performance schedule at DPAC:
• Tuesday, May 13, 2014 - 7:30 PM
• Wednesday, May 14, 2014 - 7:30 PM
• Thursday, May 15, 2014 - 7:30 PM
• Friday, May 16, 2014 - 8:00 PM
• Saturday, May 17, 2014 - 2:00 PM
• Saturday, May 17, 2014 - 8:00 PM
• Sunday, May 18, 2014 - 1:00 PM
• Sunday, May 18, 2014 - 6:30 PM
The following cities have been announced for the national tour:

Additional cities and full casting will be announced at a later date.

DIANA DeGARMO (The Narrator) From Broadway to the Hollywood Bowl, Diana is no stranger to the stage. At 16, she stole America’s heart on “Idol” before becoming the first alum to star on Broadway. Starring in such shows as HAIR (where she met her husband Ace Young), 9 to 5, Brooklyn: The Musical, Hairspray and The Toxic Avenger, she then moved to Los Angeles to play the role of “Angelina,” a fan favorite on the number one daytime series “The Young and the Restless.” In 2008, she released an acoustic EP “Unplugged in Nashville,” and recently released a Country EP “Live To Love,” composed of songs co-written with Ace. She is so excited to star alongside him playing the very role she once looked up to years ago when she was just a child in the choir. It's great to be back! Many thanks to Headline Talent Agency, Ellis Talent Group and our dog Rosie.

ACE YOUNG (Joseph) This athletic, 6'1" runt of 5 boys moved to Los Angeles from Boulder, CO, over ten years ago to pursue a career in music. Since then, Ace has worked with musical stars ranging from Brian McKnight to Desmond Child. He is a Grammy-nominated songwriter with number one hits in the U.S. and Sweden. Ace has performed for the masses at festivals, concerts, parades, bars and hole-in-the-wall joints around the world. After being a contestant on “Idol,” he pursued a Broadway career, starring first in Grease and then in HAIR, where he met his wife, Diana DeGarmo. They recently released a Country EP “Live To Love,” composed of songs co-written by the two of them. Other television credits include “Bones” and “Planet 360.” Truly comfortable in the spotlight, he is so excited to star as ‘Joseph’ alongside his new wife. Many thanks to Headline Talent Agency, Ellis Talent Group and our dog Rosie.