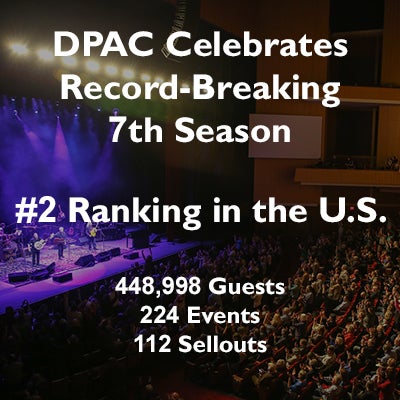 Unquestioned as the center for live entertainment in North Carolina, the combination of high profile Broadway, concert and comedy events has also gained DPAC attention on the national live entertainment scene with two of the nation's top entertainment trade magazines ranking DPAC among the most highly attended venues in the country. In their just published July 20th, mid-year edition, Pollstar Magazine lists DPAC as #2 in attendance among reporting theatre venues in America as did Venues Today in their July issue. Since opening, DPAC had been consistently listed among the top five U.S. theatres, but in these newest rankings covering the first six months of 2015, DPAC was topped only by the iconic Fox Theatre in Atlanta.

Bob Klaus, General Manager of DPAC, stated, "At DPAC everything we do has the guest in mind and this philosophy has helped us forge a special connection with live entertainment fans since our opening in 2008. And in this past season, North Carolina audiences again helped us set new records. Our focus always starts with great shows and every year DPAC has one of the best Broadway, concert and comedy line-ups of any theater in America. The booking strength of Nederlander and PFM ensured that every big show had DPAC on its list when planning a major U.S. Tour. Add it all together with all of the great new hotels, restaurants and easy parking in Downtown Durham and you have a winning formula that has helped DPAC be ranked as one of the top theaters in the U.S. every year.”

Emily McLoughlin, Marketing Director for Concerts and Comedy at DPAC, added, “While we are proud to be ranked among the top venues in the country, our team is even more honored to be named the best place in the Triangle for live entertainment as voted on by the readers and editors of five major regional publications. We’ve become as famous for the warm and welcome greetings we offer guests as we have for hosting superstar shows. On behalf of the DPAC staff, special thanks to each and every one of our fans for being part of the success of this record-breaking season.”