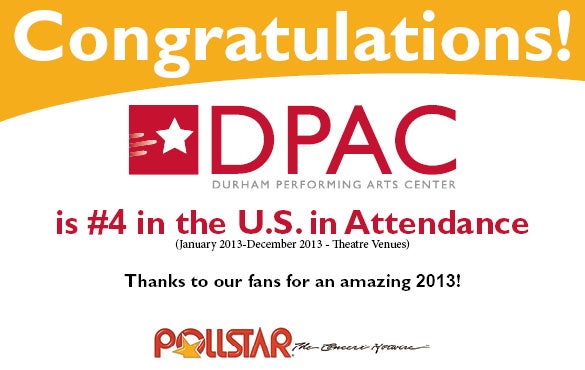 For the fourth consecutive year, DPAC, Durham Performing Arts Center has placed among the most attended theaters in the U.S. as tracked by the industry-leading trade magazine, Pollstar. The only trade publication covering the worldwide concert and live event industry with tour schedules and sales results, Pollstar named DPAC #4 in the U.S. in their recent 2013 report Worldwide Ticket Sales - Top 100 Theater Venues, based on attendance at DPAC.  DPAC’s 2013 calendar year featured 174 performances which drew over 352,000 guests and saw 57 sellouts.

Heading the list of the highest attended shows were How the Grinch Stole Christmas! - The Musical and Disney’s Mary Poppins.

"At DPAC, everything we do has the guest in mind, and this philosophy has helped us forge a special connection with live entertainment fans since our opening in 2008,” said Bob Klaus, General Manager at DPAC.  “In 2013, Triangle audiences again helped us set new records. Our focus always starts with great shows, and every year, DPAC has one of the best Broadway, concert and comedy line-ups of any theater in America. The booking strength of Nederlander and PFM ensured that in 2013 every big show had DPAC on its list when planning a major U.S. tour. Another key for us is making sure fans know about all of the great entertainment options that DPAC offers;  our Marketing Team is the most talented I have ever worked with. Finally, you cannot forget the importance of our fantastic Event Staff who delivered DPAC's legendary red-carpet customer service at every one of our 200 events last season. Add it all together, and you have the winning formula that has helped us to be named as one of the top five theaters in the U.S. every year since 2010."

“DPAC continues to strive towards the goal of offering 'something for everyone'," stated Rachel Gragg, Senior Director of Marketing at DPAC.  “It has been five remarkable years of celebrated great entertainment, and we look forward to making 2014 another year to remember.”