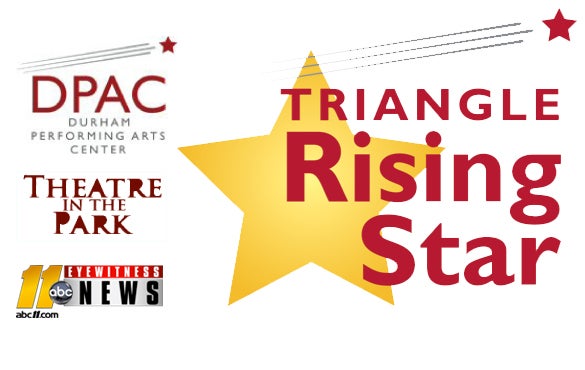 The Triangle Rising Star Awards will select Best Actor and Best Actress nominees through an audition process from roles they performed in their high school musical in the 2011/2012 season. Students will submit a highlight reel of their 2011/2012 lead role performance in a high school musical production and recent headshot and resume to DPAC by April 15th for a preliminary screening process. The top 20 submissions will be selected and invited back on June 2nd to perform audition pieces from these roles where they will be viewed and judged by a selection committee. A Best Actor and Actress will be selected and will be invited to attend the National High School Musical Theater Awards.

“Theatre in the Park is proud to once again partner with the Durham Performing Arts Center and be a part of the second annual Triangle Rising Stars. The Triangle is full of talent. Bravo DPAC for giving young actors and actresses an opportunity to showcase that talent,” said Program Marketing Director of Theatre in the Park, Brent Simpson.
The Triangle Rising Star Awards are in conjunction with The National High School Musical Theater Awards, a national celebration of outstanding student achievement in high school musical theater. Established by Nederlander Alliances and Pittsburgh CLO, the program recognizes individual artistry in vocal, dance, and acting performance, as well as honors teachers and their schools’ commitment to excellence in performing arts education.

“DPAC is thrilled to be able to offer an amazing nationally recognized educational opportunity to two Triangle students for a chance to experience part of our very own Nederlander sponsored program in New York City the Jimmy Awards™,” stated DPAC Senior Director of Marketing, Rachel Gragg.

These two top Triangle students will have the opportunity to compete in the National High School Musical Theater Awards at Broadway’s Minskoff Theatre Monday, June 25, 2012. The two winners will receive a trip to New York which includes master classes and private coaching from theatre professionals. In addition, they will have the opportunity to be seen by casting agents, meet and converse with Broadway actors, perform on a Broadway stage and compete for scholarships and other prizes.

WHO: 20 students from Chatham, Durham, Franklin, Granville, Harnett, Johnston, Lee, Moore, Orange, Person, Vance, Wake, or Warren Counties will be selected to audition on June 2nd. Each student will sing one song from the role they played in their school's high school musical.

The third annual National High School Musical Theater Awards will be held on Monday, June 27, 2011 at the Marquis Theatre on Broadway. The show will feature the presentation of the Jimmy Award™ for Best Performance by an Actress and Best Performance by an Actor. Rehearsals, master classes and private coaching sessions for all participants will take place from Wednesday, June 20 - through Tuesday, June 26, 2012. Students are to be apprised that they are required to travel to New York City to participate in the 5-6 day event that includes private coaching, auditions, interviews, rehearsals for the opening and closing number of the Jimmy Awards™ show.

HOW: Interested students can download the personal release form, application to participate, and rules and regulation at DPACnc.com under the Get Involved tab.