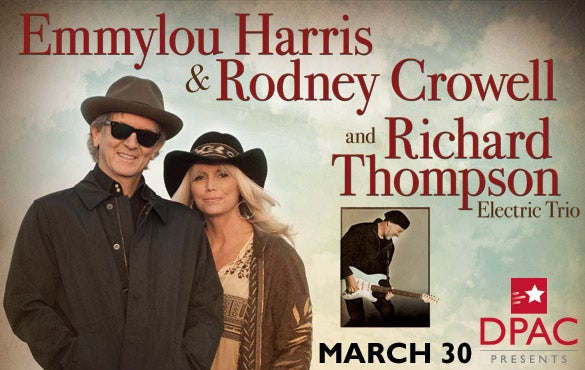 JANUARY 18, 2013 (Durham, NC) — In celebration of a new collaborative album to be released February 26, Old Yellow Moon, Emmylou Harris and Rodney Crowell are embarking on a series of tour dates this spring with Richard Thompson Electric Trio, including a stop at DPAC on March 30.

"We've always wanted to have Emmylou on our stage, and you add in legendary singer-songwriters Rodney Crowell and Richard Thompson and it's like the Super Bowl of Americana has come right here to the Triangle. Some of my favorite nights at DPAC are the shows that feature acoustic guitars and pure voices. With DPAC's clear sound and intimate seating, I can picture fans closing their eyes and feeling like they are in a living room in Nashville, a very special night with old friends and great, great songs", said Bob Klaus, GM of DPAC.

Old Yellow Moon, the 12-track duets album, features four songs written by Crowell as well as interpretations of songs such as Hank DeVito’s "Hanging Up My Heart,” Roger Miller’s “Invitation to the Blues,” and Allen Reynolds’ “Dreaming My Dreams,” among others. Produced by Brian Ahern (Johnny Cash, George Jones, Roy Orbison), Old Yellow Moon is the first official collaboration from the duo since Crowell joined Harris’ Hot Band as guitarist and harmony singer in 1975. In addition to Harris and Crowell, the album features world-renowned musicians including Stuart Duncan, Vince Gill, and Bill Payne, as well as other members of the original Hot Band.

Emmylou Harris' contribution as a singer and songwriter spans 40 years and includes 12 Grammy© Awards and a Billboard Century Award. She has recorded more than 25 albums and has lent her talents to countless fellow artists’ recordings. In recognition of her remarkable career, Harris was inducted into the Country Music Hall of Fame in 2008.

Rodney Crowell’s songs have been recorded by Johnny Cash, Norah Jones, Etta James and Grateful Dead among others. His 1988 breakthrough, Diamonds and Dirt, generated five #1 singles and a Grammy© Award for the song “After All This Time.” In 2012, Crowell released KIN: Songs By Mary Karr and Rodney Crowell, which made its debut at #1 on the Americana and Country Rock album chart. His honors also include an ASCAP Lifetime Achievement Award and membership in the Songwriters Hall of Fame.

Richard Thompson’s latest album, Electric, comes in what is arguably his most creatively productive period in a career that stretches back some 45 years, back to his emergence as a teen guitarist and songwriter with the groundbreaking Fairport Convention—the band that essentially invented the term “English folk-rock.” His dozens of albums have been consistently high on critics’ polls, and his guitar skills have earned him a Top 20 spot on Rolling Stone’s list of Best Guitarists of All Time. Richard Thompson’s many facets only seem to get more, well, multifaceted.