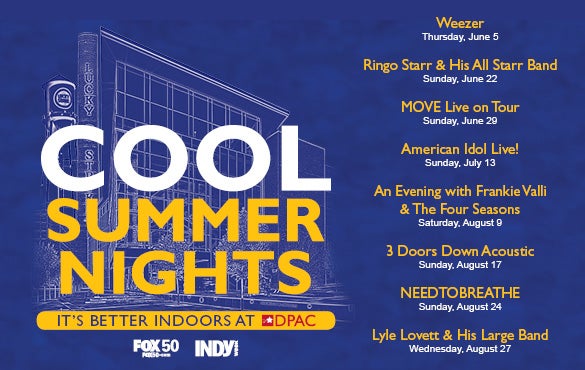 May 29, 2014 (Durham, NC) – Beat the summer heat with Cool Summer Nights at DPAC, Durham Performing Arts Center, showcasing eight can’t-miss intimate event experiences as opportunities to escape the hot weather while enjoying superstar entertainment. From June to August, DPAC is pleased to present the Cool Summer Nights series in partnership with media sponsors FOX50 and Indy Week. Single tickets to each event are on sale now featuring Grammy®Award-winning legends, some of the hottest stars from reality TV, and five DPAC premieres. No rain. No heat. No humidity. It’s better indoors at DPAC.

"This is one of DPAC’s strongest Cool Summer Nights line-ups ever, from rock to pop to dance and more. At DPAC our goal each summer is to provide our fans with the best in entertainment without the worry of rain or extreme heat that can dampen the concert experience. Our fans value the friendly, up-close, indoor experience that DPAC provides for each show,” said Emily McLoughlin, Marketing Director for Concerts and Comedy at DPAC.

Summer starts early with the Cool Summer Nights pre-party to take place in the Capitol Broadcasting Company Plaza at DPAC prior to each Cool Summer Nights performance.  Featuring corn-hole, prize giveaways, an outdoor bar, FOX50’s interactive ride ZU, and some of your favorite local radio DJs, the pre-party is the perfect start to each of the shows in this year’s line-up.

DPAC Ticket Center, located at 123 Vivian Street in Durham at the corner of Mangum and Vivian Streets, will begin summer hours starting Monday, June 16. From June 16 through September 1, DPAC Ticket Center will be open Tuesday-Friday 10am-5pm (Closed Mondays), Saturday 10am-2pm, and Sundays only when there is a scheduled performance starting three hours prior to show time.