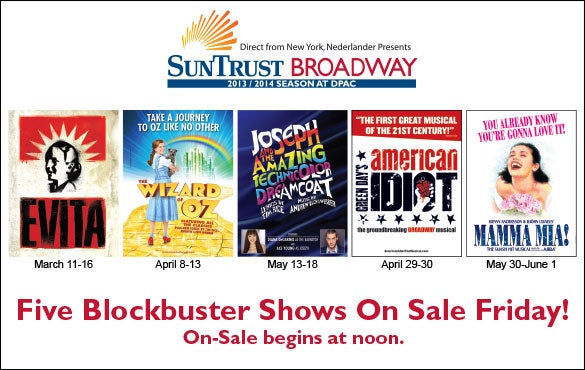 Five Blockbuster Broadway shows in the upcoming SunTrust Broadway at DPAC, 2013 / 2014 Season will go on sale Friday, September 13 at noon. These shows include: New York’s stunning blockbuster EVITA (March 11-16); a journey to Oz like no other in Andrew Lloyd Webber’s all-new THE WIZARD OF OZ, direct from Toronto’s brand new production (April 8-13); one of the most enduring musicals of all time, JOSEPH AND THE TECHNICOLOR DREAMCOAT starring Ace Young and Diana DeGarmo (May 13-18); groundbreaking rock opera AMERICAN IDIOT (April 29-30); and ultimate feel-good show MAMMA MIA! (May 30-June 1).

Groups starting at 10 or more are now on sale! Groups should contact 919.281.0587, [email protected] for more information regarding group rates.

EVITA - TIM RICE and ANDREW LLOYD WEBBER’s Tony Award®-winning musical returns at last! Eva Perón used her beauty and charisma to rise meteorically from the slums of Argentina to the presidential mansion as First Lady. Adored by her people as a champion for the poor, she became one of the most powerful women in the world — while her greed, outsized ambition and fragile health made her one of the most tragic. EVITA tells Eva’s passionate and unforgettable true story, and features some of theater’s most beautiful songs, including “Don’t Cry for Me Argentina,” “Another Suitcase in Another Hall” and “High Flying, Adored.” Don’t miss the stunning new production of EVITA, directed by MICHAEL GRANDAGE and choreographed by ROB ASHFORD, that Channel 4 New York calls “THE HOTTEST TICKET IN TOWN!”

THE WIZARD OF OZ - “We’re off to see….” the most magical adventure of them all. Andrew Lloyd Webber’s new production of The Wizard of Oz is an enchanting adaptation of the all-time classic, totally reconceived for the stage. Developed from the ever popular MGM screenplay, this new production contains all the beloved songs from the Oscar®-winning movie score, all the favorite characters and iconic moments, plus a few surprises along the way, including new songs by Tim Rice and Andrew Lloyd Webber. Click your heels together and join Scarecrow, Tin Man, Lion, Dorothy and her little dog Toto, as they journey through the magical Land of Oz to meet the Wizard and obtain their hearts’ desires. Watch out for the Wicked Witch of the West and her winged monkeys as you rediscover the real story of Oz in this fantastic musical treat for all the family.

JOSEPH AND THE AMAZING TECHNICOLOR DREAMCOAT - Starring Dianna DeGarmo as “The Narrator” and Ace Young as “Joseph!” One of the most enduring shows of all time, Tim Rice & Andrew Lloyd Webber’s JOSEPH AND THE AMAZING TECHNICOLOR DREAMCOAT is the irresistible family musical about the trials and triumphs of Joseph, Israel’s favorite son. Retelling the Biblical story of Joseph, his eleven brothers and the coat of many colors, this magical musical is full of unforgettable songs including "Those Canaan Days," "Any Dream Will Do" and "Close Every Door To Me."

AMERICAN IDIOT - The New York Times calls AMERICAN IDIOT “thrilling and emotionally charged, as moving as anything on Broadway!” Based on Green Day’s groundbreaking rock opera of the same name, this daring new musical tells the story of three lifelong friends, forced to choose between their dreams and the safety of suburbia, and features the smash hits “Boulevard of Broken Dreams,” “Holiday” and “21 Guns.”

MAMMA MIA! is the ultimate feel-good show that has audiences coming back again and again to relive the thrill. Now it’s your turn to have the time of your life at this smash-hit musical that combines ABBA’s greatest hits, including “Dancing Queen,” “S.O.S.,” “Super Trouper,” “Take A Chance on Me” and “The Winner Takes It All,” with an enchanting tale of love, laughter and friendship. Whether it’s your first visit or your fourteenth, see the show that has the whole world coming back for more, because every time feels like the first time at MAMMA MIA!