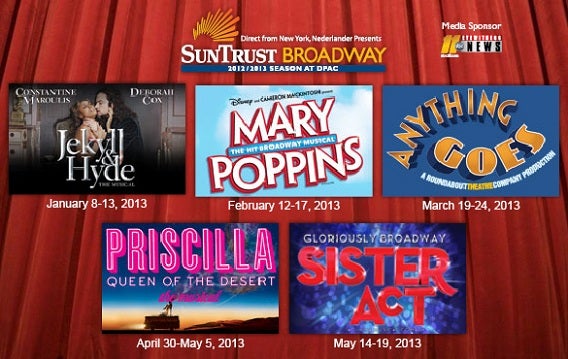 Groups save big at DPAC and should contact 919.281.0587, [email protected] for more information regarding group rates.

JEKYLL & HYDE - American Idol star and Tony® Award nominee Constantine Maroulis joins with Grammy® Award nominee and R&B superstar Deborah Cox to inject new life into the classic tale of good and evil JEKYLL & HYDE. After four thrilling, chilling years on Broadway and multiple world-wide tours, this dark and dangerous love story from Tony® and Grammy® Award nominee Frank Wildhorn and Oscar® and Grammy® winner Leslie Bricusse, returns in a stunning new pre-Broadway production directed by Tony® nominee Jeff Calhoun and includes all the classic songs (“This is the Moment,” “A New Life,” “Someone Like You”) that first grabbed audiences by the throat and transformed JEKYLL & HYDE into a theatrical phenomenon.

MARY POPPINS is bringing its own brand of Broadway magic to theaters across the country, which has the NY Post raving, “a toe-tapping, roof-raising extravaganza!” This spectacular hit has astonished over seven million people worldwide with its pure Broadway magic. With four productions currently running on three continents, MARY POPPINS is one of the biggest stage musical successes in recent years to come out of London and New York.

ANYTHING GOES – All aboard for this saucy and splendid production of Roundabout Theatre Company’s ANYTHING GOES, winner of three 2011 Tony® Awards including Best Musical Revival and Choreography! One of the greatest musicals in theater history, Cole Porter’s first-class musical comedy is sailing to the Triangle, while it continues a triumphant run on Broadway where The New York Times calls it “MUSICAL-COMEDY JOY" and USA Today hails it as "GLORIOUS and EXUBERANT!"

PRISCILLA: QUEEN OF THE DESERT - This spectacular show tells the uplifting story of a trio of friends on a road trip of a lifetime, who hop aboard a battered old bus searching for love and friendship in the middle of the Australian outback and end up finding more than they could ever have dreamed. An international hit with over 500 dazzling, 2011 Tony® Award-winning costumes, PRISCILLA features a hit parade of dance-floor favorites including “It's Raining Men,” “Finally” and “I Will Survive.” The Hollywood Reporter calls PRISCILLA “funny and fabulous! Joyous entertainment with eye-popping visuals and unexpected heart!”

SISTER ACT is Broadway's feel-amazing musical comedy smash! The New York Post calls it "RIDICULOUSLY FUN,” and audiences are jumping to their feet in total agreement! Featuring original music by 8-time Oscar® winner Alan Menken (Beauty and the Beast, The Little Mermaid, Little Shop of Horrors), SISTER ACT tells the story of Deloris Van Cartier, a wannabe diva whose life takes a surprising turn when she witnesses a crime and the cops hide her in the last place anyone would think to look—a convent! Under the suspicious watch of Mother Superior, Deloris helps her fellow sisters find their voices as she unexpectedly rediscovers her own. A sparkling tribute to the universal power of friendship, SISTER ACT is reason to rejoice!