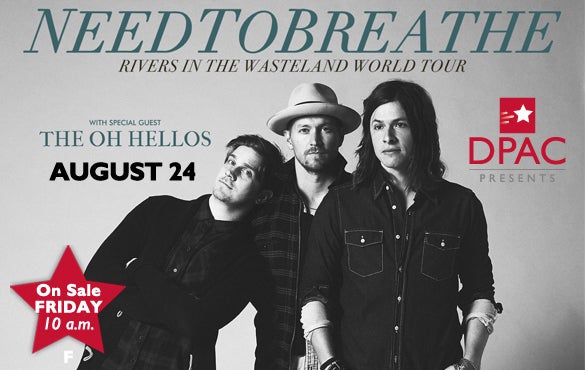 April 15, 2014 (Durham, NC) – With their reputation as a must-see live act built from non-stop touring over the past decade, South Carolina natives NEEDTOBREATHE open a new chapter in their story with the release of their fifth studio album, Rivers in the Wasteland, available today.  Along with supporting act The Oh Hellos, NEEDTOBREATHE’s Rivers in the Wasteland World Tour will make a stop for one night only at DPAC, Durham Performing Arts Center on Sunday, August 24, 2014.

Friends of DPAC members may place their orders online starting April 17 at 10 a.m. Joining Friends of DPAC is free, and you can register at www.DPACnc.com/fod.

NEEDTOBREATHE followed up the success of their fourth album The Reckoning, which hit No. 1 on the Billboard Rock Albums Chart and No. 6 on the Billboard Top 200, with relentless touring, crisscrossing the country on multiple headlining tours, playing standout sets at major festivals like Bonnaroo and Austin City Limits and performing throughout Europe. With their first four albums selling in the hundreds of thousands, they describe the start of their most recent work, Rivers in the Wasteland, as a desire to return to the band’s roots and find the anchor of musical simplicity.

“We had a few goals as a band for the album,” says front man Bear Rinehart. “I had them written in my notebook while I was writing songs. They were really basic: Keep it simple, not too many instruments, and have fun with it. And the last one was: be ourselves. Probably 90 percent of the record is all live takes”

As shown  in "Prove the Poets Wrong," a documentary released this past December, the band went through a tumultuous narrative that led them to revisit their origin and emerge the most energized they’ve ever been. Rivers In The Wasteland balances a palpable tension between two very different songwriters with a sense of brotherhood and shared voices. The album reveals that truly honest and authentic music can only come when everyone in the band believes in the same thing. For the musicians, the hope is that the songs inspire their fans and emphasize how committed NEEDTOBREATHE is to doing what they love in a way that doesn’t compromise anything.


About DPAC
Since its opening in 2008, DPAC, Durham Performing Arts Center, has become the center for live entertainment in the Triangle. Recognized for its contemporary design, DPAC features 2,700 seats, intimate sightlines and state-of-the art sound and video. Listed four times in the top 10 in Pollstar magazine’s annual worldwide theater attendance rankings, DPAC is currently the #3 ranked theater in the U.S.

What is up next at DPAC? See the Cast of TruTV’s IMPRACTICAL  JOKERS Live! (April 26), A special intimate performance with ROB THOMAS (May 1), followed by Powerhouse Songstress  LEDISI with a Grammy®-Winning Fusion Band. (May 6).