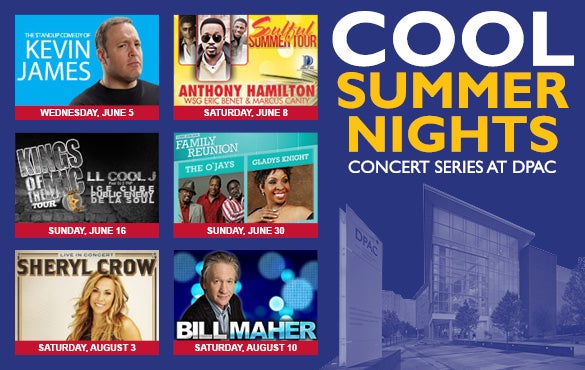 May 23, 2013 (Durham, N.C.) – Throughout this blazing North Carolina summer, DPAC, Durham Performing Arts Center, is pleased to offer six must-see indoor shows as opportunities to escape the heat and humidity while enjoying superstar entertainment. From June to August, there will be six concert and comedy events that offer something for everyone. Single tickets to each event are on sale now for the 2013 Cool Summer Nights Concerts at DPAC featuring Grammy® Award-winning artists, two superstar comedians, and five DPAC premieres.

"DPAC’s Cool Summer Nights is something our team looks forward to every year. We’ve put together a lineup that features the hottest artists and comedians to be showcased in our intimate theater. Our fans already know that DPAC provides the Triangle’s best summer event experience. As we like to say, it’s better indoors,” said Emily McLoughlin, Marketing Director for Concerts and Comedy at DPAC.

Summer starts early with the Cool Summer Nights Launch Party presented by Pelican’s SnoBalls to take place in the Capitol Broadcasting Company Plaza at DPAC prior to the Kevin James show on June 5 from 5:30 p.m. until 7:30 p.m. This event is open to the public and will feature free SnoBalls, a food truck rodeo, FOX 50’s interactive ride ZU, Radio 96.1 live with Allie Morgan and much more. Tickets will be required to attend the Kevin James show following the Launch Party.

Throughout the summer, DPAC celebrates Cool Summer Nights Concerts with weekly giveaways of specially-themed prize packs that revel in the “cool” factor of summer. DPAC teamed up with some of the best summer destinations to create prize packs valued at $300 that are perfect for the whole family to enjoy. Prize pack includes:
• Two park admission to Wet N’ Wild Emerald Pointe for use during summer 2013
• Two tickets to a Durham Bulls game in the 2013 Season
• A stack of Pelican’s SnoBalls “SnoBucks” to be used at one of 8 Triangle Locations
• A $50 gift card to one of Durham’s coolest restaurants, and more!

DPAC Ticket Center, located at 123 Vivian Street in Durham at the corner of Mangum and Vivian Streets, will begin summer hours starting Memorial Day weekend. From May 27 through September 2, DPAC Ticket Center will be open Tuesday-Friday 10am-5pm (Closed Mondays), Saturday 10am-2pm, and Sundays only when there is a scheduled performance starting two hours prior to show time.

No rain. No heat. No humidity. It’s better indoors with Cool Summer Nights Concerts at DPAC.