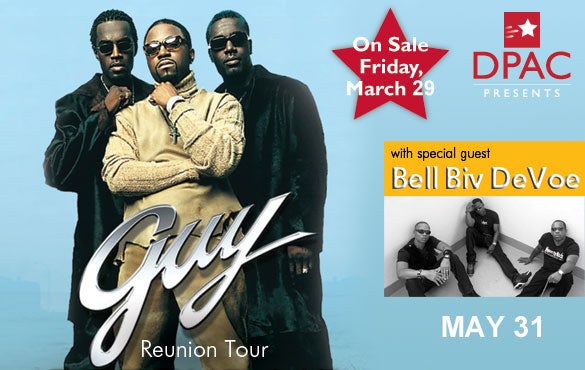 Guy Reunion Tour with Bell Biv DeVoe at DPAC, May 31

March 8, 2013 (Durham, NC) — R&B fans get ready for another exciting night of entertainment when Guy with special guest Bell Biv DeVoe grace the stage of DPAC, Durham Performing Arts Center, on May 31, 2013. This hard-edged driven R&B, funk and hip-hop evening is presented in partnership with The Dome Group.

“The '90s produced some of the best R&B in history. We are proud to bring two of the biggest groups of that era to DPAC. Guy and BBD will be a show for the ages. Triangle fans will not want to miss this one,” said Sulaiman Mausi of The Dome Group Inc.

Guy was one of the pioneering groups in hip-hop to sport the new jack swing sound, a movement that blended traditional soul vocals into hip-hop beats, with credit for the genre’s invention going to group founder and super-producer Teddy Riley.

Formed in Harlem in 1987 by young musician/record producer Teddy Riley, the original members of Guy included Riley and R&B singer-songwriters Aaron Hall and Timmy Gatling. Their self-titled 1988 debut album went triple platinum, producing significant R&B hits hits “I Like,” “Groove Me,” “Spend the Night,” and “Teddy’s Jam.”. The 1990’s introduced The Future, which featured Hall’s brother, Albert Damion Hall, in place of Gatling and spawned R&B hits “Let’s Chill,” “Do Me Right,” “D-O-G Me Out,” and “Long Gone.”

Riley went on to produce artists such as Heavy D, Michael Jackson, and Blackstreet; in 1988, Riley produced Bobby Brown’s Don’t Be Cruel, the album that helped new jack swing cross over into the pop mainstream. Both Aaron and Damian recorded solo albums, Aaron being a major influence on the style of R&B singer R. Kelly.

In 2000, Riley and the Hall brothers reunited to release their first album in nine years titled Guy III.

Ricky Bell, Michael Bivins and Ron DeVoe, better known as BBD a.k.a. Bell Biv DeVoe, bridge the gap between hip-hop and R&B like no other male group today. An offshoot of the hugely popular '80s vocal group New Edition, BBD fused hip-hop beats, b-boy attitude and R&B harmonies. The result was 1990’s explosive debut album, Poison, which would sell over 4 million copies and spawn the platinum title cut. Poison also featured the Top 3 single “Do Me!” and the popular “BBD (I Thought It Was Me)” and “When Will I See You Smile Again?.” In 1991, the group followed up their debut with WBBD-Bootcity (Remix Album). The remix album sold over 700,000 units. In 1993, BBD released the gold-certified Hootie Mack, which contained the hit ballad “Something In Your Eyes.” BBD has claimed three American Music Awards, two Soul Train Awards, received keys to cities across the country and has been honored for their humanitarian efforts.

In 1996, the group participated in the New Edition reunion that resulted in the multi-platinum Home Again. New Edition sold over 20 million albums and has won over millions of fans around the world.

With a mission of presenting one-of-a-kind live entertainment events, DPAC truly has “something for everyone,” hosting over 200 performances a year including spectacular touring Broadway productions, high-profile concert and comedy events, family shows and the heralded American Dance Festival. Operated under the direction of Nederlander and Professional Facilities Management (PFM), DPAC has twice been listed as the #1 performing arts organization in the region by the Triangle Business Journal.

What’s up next at DPAC? The battle of R&B’s best the Whispers versus the Dramatics (March 9), one of the world’s most loved tours Lord of the Dance created by Michael Flatley (March 10), followed by direct from Broadway the internationally acclaimed Beatles concert RAIN (March 12).