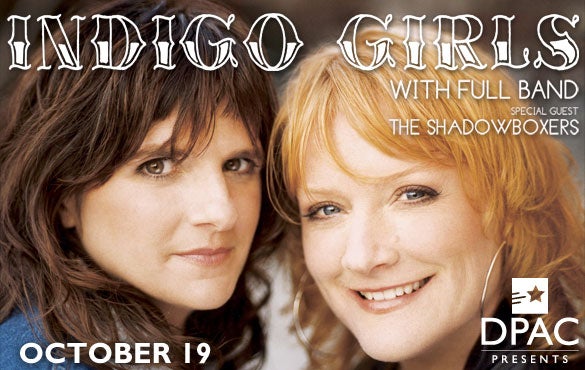 Home|News|https://www.dpacnc.com/news/category|Indigo Girls With Full Band To Perform at DPAC, October 19

Indigo Girls With Full Band To Perform at DPAC, October 19

July 25, 2012 (Durham, NC) — Twenty-five years into their career, the Indigo Girls still amaze fans with their ability to change, no matter the state of the music industry. Their fourteenth studio album, Beauty Queen Sister, is a testament to Amy Ray’s and Emily Saliers’ consummate musicianship, diverse songwriting and melodic harmonies. Fans will be able to experience their heart-over-head style for the first time at DPAC when the Indigo Girls with full band The Shadowboxers, who will also open the evening’s show, take the stage on October 19.

Saliers and Ray began performing together in high school. They saw their public profile take off with the 1989 release of their self-titled breakthrough album that included the first hit, “Closer To Fine,” and went on to win Best Contemporary Folk Recording at the 1990 Grammys®.

"Ever since DPAC opened I have felt we'd be the perfect venue for the Indigo Girls. This will be one of our most intimate concerts ever, since we are selling only a special limited capacity of our best seats for this show. Fans tell us a concert at DPAC always seems more special, and I imagine our sightlines and state-of-the-art sound will be at their best for this rare Indigo Girls full band show," said Bob Klaus, GM of DPAC.

Friends of DPAC members may place their orders on August 1. Joining the Friends of DPAC is free, and you can register at www.DPACnc.com/friendofdpac.