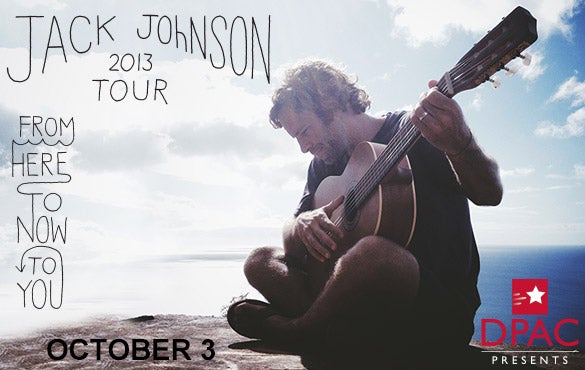 June 17, 2013 – Jack Johnson announces fall headline tour dates in support of his sixth studio album, From Here To Now To You, to be released on September 17 through Johnson’s own Brushfire Records. Johnson and his band will kick off their tour in Europe on September 5, and return to the States with a headline performance at Life is good Festival on September 22 in Canton, MA. From there, inspired by his solo acoustic Hawaiian Islands Theater Tour last year, Johnson will play some of the most beautiful and intimate seated theatres in North America including Nashville’s Ryman Auditorium, Seattle’s Paramount Theatre and the Orpheum Theatre in Los Angeles, CA. As Johnson told Rolling Stone about his 2012 Hawaiian Islands Tour: "They were the most magical shows," he says. "It gave you the time to tell stories and where the songs came from. I really enjoyed that. I think we're going to mix it up next year with different types of tours, but at least for a lot of it, we're going to try to do some theaters." With 25 of his 28 fall tour venues in historic theaters, Johnson is doing just that. As with all of his tours since 2008, Johnson will donate 100% of his tour profits to charity.

Tickets for Jack Johnson’s upcoming fall tour of North America in support of From Here To Now To You will be available exclusively through a lottery on www.jackjohnsonmusic.com allowing fans a fair shot at getting a ticket to these intimate theater shows. From today, June 17 at 11:00 AM ET until the following Monday, June 24 at 10:00 AM ET, fans can enter the lottery for a chance to purchase up to 4 tickets to the show of their choice. Winners will be selected after June 24 and contacted by email with their purchase instructions. In Europe, tickets will be sold through normal ticket outlets. The European shows go on sale to the public on Thursday, June 20th and Friday, June 21st. Please check local show information for onsale times.

For the fall tour, Johnson and his production team, alongside Reverb, will continue to pave the way in green touring practices and community engagement initiatives. Tour vehicles will be fueled by domestic sustainable biodiesel wherever possible, concertgoers will be offered mass transportation options, waste reduction measures will be expanded and single-use disposable water bottles will continue to be eliminated backstage. In addition the tour will source local food from “farm to stage”, produce and offer eco-friendly merchandise, provide free water refill stations and invest in community based carbon offset projects. For all details, visit: www.jackjohnsonmusic.com/greening

Through ongoing promotion of the All At Once campaign, Johnson’s fall From Here To Now To You Theater Tour will support over 75 hand-chosen community groups across Europe and North America with direct and matching donations. This year’s All At Once campaign will focus on engaging fans to take action in support of sustainable local food systems and plastic free initiatives. For all details, visit: www.allatonce.org

From Here To Now To You was recorded in Hawaii at Johnson’s Mango Tree Studio and produced by Mario Caldato, Jr. who produced Johnson's biggest selling album, In Between Dreams, as well as albums by Beastie Boys, Super Furry Animals, Seu Jorge and more. The album also marks a reunion with good friend and fellow musician Ben Harper who lends his talents of vocals and Weisenbborn slide guitar for a song. The album’s first single, “I Got You” was #1 most added at AAA radio and is now available to purchase on iTunes alongside a full album pre-order which has already risen into the iTunes Top 10, 3 months before its release. http://smarturl.it/JackJohnsonFHTNTYiT
Listen first single, “I Got You” here: http://bit.ly/13truQ6

Tour Dates:
Bahamas will open most dates on Jack's fall tour, except as noted **
A show in New York City will be announced soon.