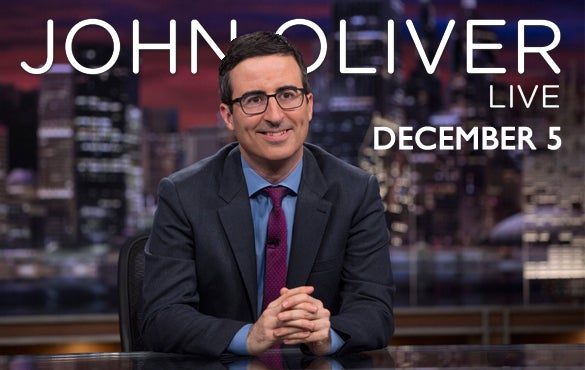 Friends of DPAC members may place their orders starting August 13. Joining Friends of DPAC is free, and you can register at http://www.dpacnc.com/fod.

John Oliver is an Emmy and Writer’s Guild Award winning writer. His HBO show Last Week Tonight with John Oliver presents a satirical look at the week in news, politics and current events. On his occasional breaks from television, John returns to his first love of stand-up and plays to sold-out venues across the US.

From 2006 to 2013 John was a correspondent and guest host on the multi-award winning The Daily Show with Jon Stewart. He first came to prominence as a cutting-edge political stand up in the UK, with a string of television appearances and sold-out solo shows at the Edinburgh Festival. Having made the move to America in 2006 to work on The Daily Show, John won the Breakout Award at the Aspen Comedy Festival in 2007 and went on to write and star in his first hour long Comedy Central stand up special John Oliver: Terrifying Times in 2008. Such was its success that John has now hosted four seasons of his own stand up series for Comedy Central, John Oliver’s New York Stand Up Show, featuring a hand-picked selection of his favorite comedians.

With long-time collaborator Andy Zaltzman, John co-writes and co-presents the hugely popular weekly satirical podcast The Bugle. Its success has grown significantly since its inception in 2007 and now pulls in over 500,000 downloads a week. John and Andy previously wrote and starred in three series of The Department (BBC Radio 4) alongside Chris Addison, as well as two series of BBC Radio 4 show Political Animal, based on their satirical live stand-up show.

John also continues to successfully tour the U.S. as a stand up. He has a regular guest role on NBC’s sitcom Community, is the voice of Vanity Smurf in The Smurfs movie and its sequel The Smurfs 2, and has recently appeared in The Simpsons as Marge and Homer’s next-door neighbor, Booth Wilkes-John.

"Oliver is a master storyteller, stringing jokes together so tightly that not a syllable falls out of place." - The Onion

"The most intelligent political stand-up you'll see this year." - The Times