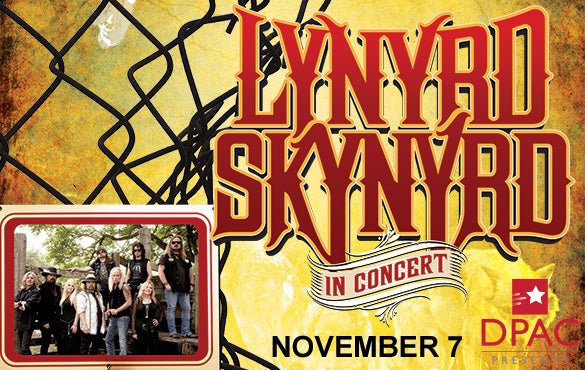 “Stages are filled in venues around the country with rock acts that came into our lives in the 1970s. Skynyrd is one of the handful of legendary acts that not only still deliver; they may be even better now than they were 20 years ago. Our fans think every show is special at DPAC: great sound, up-close views of the stage, and legendary performers. This show promises to be extra special though, as one of the world's greatest rock and roll bands in history play an intimate theater show for the very first time ever,” said Bob Klaus, GM of DPAC.

Having survived enough tragedy and just plain hard miles for 10 bands, Lynyrd Skynyrd is, remarkably at this stage of their career, on a roll. Their classic hits like “Gimme Three Steps”, “What’s Your Name”, and “Saturday Night Special” are just a few reasons they are arguably the quintessential American rock band.

Led by core members Gary Rossington (guitar), Johnny Van Zant (vocals) and Rickey Medlock (guitar), Skynyrd’s latest album Last Of A Dyin’ Breed continues to build on the legacy that began over 35 years ago in Jacksonville, Florida. Joining them in the studio and on the road are new bassist Johnny Colt (Black Crowes, Train) guitarist Mark “Sparky” Matejka (a “Nashville cat, just a pickin’ fool,” according to Rossington), and keyboardist Peter Keys, who replaced Powell on the God & Guns tour.

In a tragic tale oft-told, the Skynyrd story could have ended in a Mississippi swamp with the 1977 plane crash that killed three band members, including Ronnie Van Zant and Steve Gaines. Since then, the band has lost vital players in Billy Powell, Ean Evans, Allen Collins, Leon Wilkeson and Hughie Thomasson, yet here they are again with a hard-rocking, stirring album that can sit proudly alongside any recording that bears the Skynyrd name. The breed may be nearing extinction but Skynyrd is very much alive and ready to throw down.

Lynyrd Skynyrd is a band of today, carrying a steely mantle forged in the sweaty confines of the Hell House in Jacksonville decades earlier. There’s a reason this is one of the most beloved bands of all time. Skynyrd is, per usual, taking their music to the people, as fans have a chance to catch the band live on tour including this stop in Durham at DPAC.