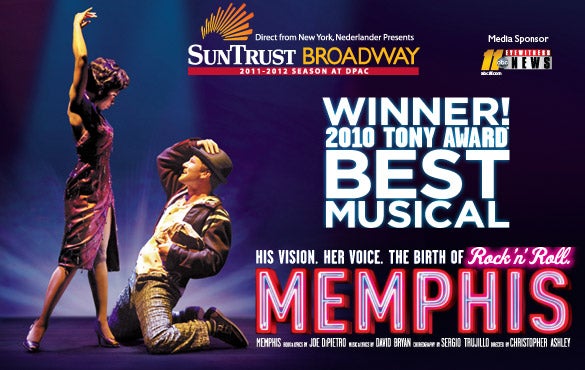 You have been with the rock group Bon Jovi for more than 25 years. What do you think is the key to the band’s continued popularity?
Writing good songs, making good records, and always giving your all at every live concert.

How did you and Joe DiPietro meet and when did you begin collaborating on MEMPHIS?
I got Joe’s script from an agent and when I read it, I immediately loved the story and I heard all the music in my head. I know that last part sounds a little crazy, but what’s there now on stage is what I heard. I called up Joe and introduced myself, and when we got together it was magic. We work very well together. Joe is a great collaborator.

What attracted you to write the musical MEMPHIS?
The story. It’s an epic American tale about the birth of rock & roll, I just love that we not only portray one of the first white DJ’s to integrate the radio, but we also dramatize an interracial love story (when it was against the law in many states to have a interracial marriage). Ultimately, it’s a story about how music helped bring about social change, and how this music helped bring people together.

During all the years it took for MEMPHIS to get to Broadway. What compelled you to continue with the process?
It’s not a sprint but a marathon! Every time we did a production, we worked on the show and we learned where it was and where we had to take it. A musical is very complicated. You have to create story, songs, and dance, and they all have to work together. The fine tuning process happens in front of an audience and that takes many, many hours to get right. But it was easy to persist, because I always believed that MEMPHIS is a show that entertains and tells an important American story.

How is writing song for a rock band different than writing songs for a Broadway musical?
In a rock band, you’re just writing for the voice of the lead singer. In a musical, you have many different characters you have to make sing. Still ultimately, a good song is a good song.

How did you get involved with writing the music for the off-Broadway hit, Toxic Avenger?
Joe called me up with the idea. We were on a break from MEMPHIS, so we started to write Toxic Avenger. We began it as a bit of a lark, but it kept getting funnier and better and we wound up writing a show that audiences really seem to love.

Can you describe why Broadway musicals are so difficult to write? There are so many parts and it takes a lot of time to get them to work together. And you have to get it right before you get to Broadway. Joe and I work like crazy to make sure it’s a good as we can make it. With MEMPHIS, we put together a great creative team and we had the good fortune of working with great producers. And in the end we have a multiple award-winning show because of it. But man, we worked hard.

Who were your influences in writing the rock score for MEMPHIS?
I grew up playing in clubs with bands that played those Memphis-influenced songs, so it was in my blood. It was a very special time in music.

Name some of your favorite ‘50s songs and why they are your favorites?
There are too many songs to name., but I am always struck by how much joy and hope there is in that music. It was the beginning of social change in America - and music was at the forefront.

You have won many honors as a rock musician, including winning a Grammy Award. How was the Tony® awards presentation different than the Grammy Awards?
The three Tony® awards I won is unbelievably special. It was a long road with MEMPHIS, but I always believed in our show. To be honored and welcomed by the Broadway community for my work feels great. And it is just the start. Joe and I have a new show in the works called Chasing The Song (about American song writers from 1962-1964). We’ll continue to create new works for a long time.

Have you always been a fan of Broadway musicals? If so, what’s your favorite musical?
I didn’t see a lot of musicals growing up. I saw Fiddler on the Roof and really liked it. The songs and the stories were interwoven perfectly.

Have members of Bon Jovi seen MEMPHIS? If so, what was the reaction to your music and the show?
Yes they have. They LOVED the show.

As you were writing the score did you play the music for the other members of Bon Jovi, to get their feedback?
No I didn’t. I wanted to wait for them to see it on Broadway.

Can you describe a most enjoyable part of writing a Broadway musical?
There are so many phases a show goes through and I love them all. It starts with Joe and me in a room, then we add actors for a reading, then we add a director, choreographer and creative team to put a production on stage. Then we’ll try out the show with a few out-of-town productions before we bring it to Broadway. And all this time, we’re constantly tinkering with every aspect of the show. We don’t stop until we feel we’ve gotten it right. Or, as I like to say, until we no longer feel as if we’ve gotten anything wrong.

Why do you think fans of rock and roll, people who might have never even seen a Broadway musical, would love MEMPHIS?
It’s an important American story that celebrates what we have in common as human beings rather then what separates us. And it ROCKS!

What new musical are you and MEMPHIS collaborator, Joe DiPietro, working on now?
Joe and I have a new original show in the works called Chasing The Song. It’s about American songwriters from 1962-1964 based on the songwriters who worked in the Brill Building. It’s a fictional story about factual America. We’ve already written a bunch of songs and have a great script. We’re at the beginning where it’s just Joe and me in the room, but soon we’ll be ready to get to the next stage of development. We’re looking forward to creating and building a brand new work.