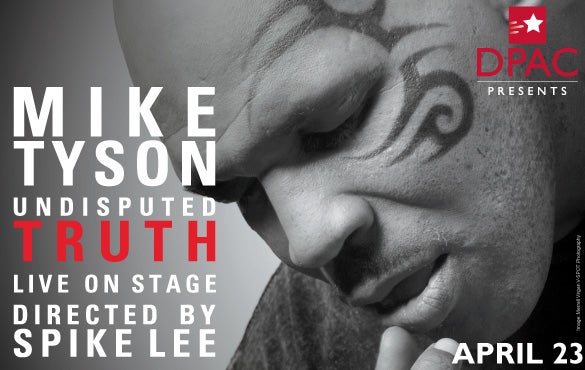 After a highly successful bout on Broadway, Mike Tyson announced today that he will take his acclaimed one-man show, “MIKE TYSON: UNDISPUTED TRUTH,” on a national tour. Helmed by renowned director Spike Lee and producer James L. Nederlander, the tour is set to begin February 2013 with a stop at DPAC, Durham Performing Arts Center on April 23, 2013.


The legendary boxer, “Iron Mike,” will kick off his 10-week tour with a two-night engagement at the Murat Theatre in Indianapolis on February 12 –13. The three month tour will visit over 36 cities including Chicago, San Francisco, Los Angeles, Houston, and Washington D.C. For ticketing information and a full list of cities, please visit: www.facebook.com/MikeTysonOnTour.

“After a successful run at the MGM in Las Vegas and on Broadway at the Longacre Theatre with Spike Lee, I’m excited to take ‘MIKE TYSON: UNDISPUTED TRUTH’ on tour and share it with my fans across the country,” said Tyson. “’Undisputed Truth’ is my story- I'm giving my all. I’m proud to take the show nationwide, and it’s a privilege to continue working with The Nederlander Organization.”

“MIKE TYSON: UNDISPUTED TRUTH” is a rare, personal look inside the life and mind of one of the most feared men ever to wear the heavyweight crown. Directed by Academy Award nominee Spike Lee, this riveting one-man show goes beyond the headlines, behind the scenes and between the lines to deliver a must-see theatrical knockout.