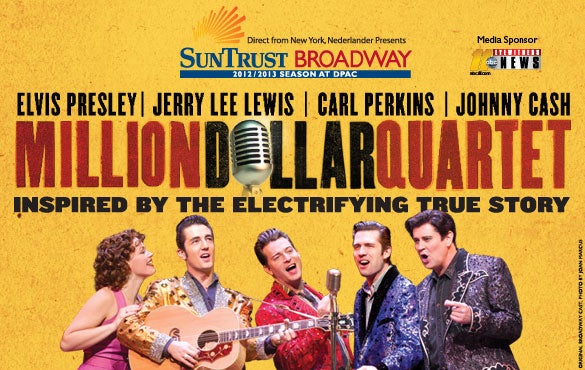 DPAC, Durham Performing Arts Center announces tickets for the national tour of the Broadway musical MILLION DOLLAR QUARTET, inspired by the electrifying true story, will go on sale Friday, August 10 at 10 a.m. Ticket prices range from $17.50 to $65 and will be available at the DPAC Ticket Center, all Ticketmaster outlets, by visiting DPACnc.com or by calling 919.680.2787. Group orders of 10 or more may be placed by emailing Groups@dpacnc.com or calling 919.281.0587.

The Tony® Award Winning musical, MILLION DOLLAR QUARTET is set on December 4, 1956, when an auspicious twist of fate brought Johnny Cash, Jerry Lee Lewis, Carl Perkins and Elvis Presley together. Sam Phillips, the “Father of Rock ‘n’ Roll” who was responsible for launching the careers of each icon, brought the four legendary musicians together at the Sun Records storefront studio in Memphis for the first and only time. The resulting evening became known as one of the greatest rock ‘n’ roll jam sessions in history.

When the Broadway production opened in April 2010, critics and audiences leapt to their feet in unanimous praise. The New York Times called the show, “a buoyant new musical that whips the crowd into a frenzy,” New York Magazine labeled it, “a dazzling raucous spectacle that sounds like a million bucks,” and NY1 called it, “90 minutes of platinum grade entertainment.” The musical continued a successful New York engagement at New World Stages through June 2012.

The Chicago production of MILLION DOLLAR QUARTET opened in 2008 and is still playing to packed houses at the Apollo Theatre. The West End production played at the Noël Coward Theatre in London in 2011.