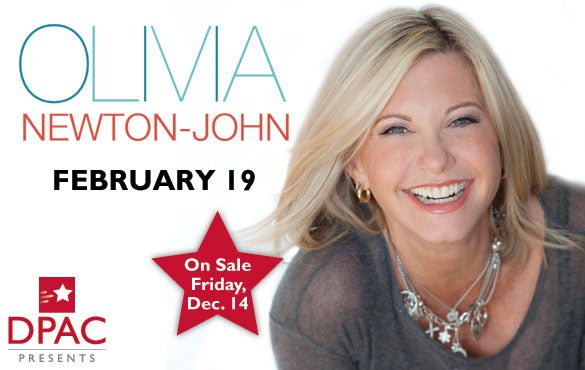 An Intimate Evening with Entertainment Superstar

November 30, 2012 (Durham, NC) – Olivia Newton-John is a voice and face the world has known and loved for over four decades of hit songs and movies. Come hear her when she comes to DPAC, Durham Performing Arts Center on February 19, 2013.

"At DPAC, everyone on staff has a secret list of superstars they hope will come and play our venue. For me Olivia Newton-John has always been on that list. About ten years ago a good friend took me to an Olivia Newton-John concert raving about what a great live show it was. I walked away a believer, and can say firsthand there is not a better or more fun night of hits than a concert with ONJ. DPAC was made for legendary concerts just like this," said Bob Klaus, GM of DPAC.

With a career spanning more than four decades and over 100 million albums sold, multiple Grammy Award winner Olivia Newton-John is currently celebrating her 40th year in music with a North American and UK concert tour, new book and, holiday CD.

A vibrant, creative individual who is adored by fans around the world, Olivia remains an icon in both movie and music history, having been honored with four Grammy Awards, numerous Country Music, American Music and People’s Choice Awards, an Emmy Award, ten #1 hits including “Physical,” which topped the charts for ten consecutive weeks, and over 15 top 10 singles. (Billboard Magazine recently listed “Physical” at #6 on their Top 100 Songs Of All Time list and named it “The Sexiest Song of All Time”.) Olivia hit the Hot 100 chart once again with the dance remix of “Physical” that she recorded and performed with Jane Lynch on the hit series, “Glee.”

In 1978, her co-starring role with John Travolta in “Grease” catapulted Olivia into super-stardom. This film’s best-selling soundtrack featured the duets “You’re The One That I Want” and “Summer Nights,” with Travolta, as well as her mega-hit, “Hopelessly Devoted To You.” To date “Grease” remains the most successful movie musical in history. Her other feature film credits include “Toomorrow,” “Xanadu,” “Two Of A Kind,” “It’s My Party,” “Sordid Lives,” and “Score: A Hockey Musical.” Her latest film, “A Few Best Men,” has received critical acclaim around the world and was recently released in the United Kingdom.

Adding author to her already impressive career, Olivia’s new cookbook, “LivWise: Easy Recipes for a Healthy, Happy Life” was recently released and all of her royalties will benefit the Olivia Newton-John Cancer and Wellness Centre (ONJCWC) in her hometown of Melbourne, Australia. As a breast cancer “thriver,” and after nearly ten years of fundraising and building, Olivia is thrilled that the ONJCWC opened its doors to patients on July 2, 2012 – almost 20 years to the day from her own cancer diagnosis.

For the 2012 holiday season, Olivia and John Travolta have reunited for the first time in over 30 years and combined their iconic voices for “This Christmas,” available November 13 from Universal Music Enterprises. A true labor of love made specifically for “the giving season,” Travolta and Newton-John will donate the artist proceeds from the album equally to their respective charities, the Jett Travolta Foundation and the Olivia Newton-John Cancer and Wellness Centre. The CD features special guests Barbra Streisand (“I’ll Be Home for Christmas”), Tony Bennett and the Count Basie Orchestra (“Winter Wonderland”), James Taylor (“Deck the Halls”), Chick Corea (“This Christmas”), Kenny G (“Rockin’ Around the Christmas Tree”), Cliff Richard (“Have Yourself a Merry Little Christmas”) and the original “I Think You Might Like It” by writer/producer John Farrar.

With her current and ongoing projects and philanthropic endeavors, Olivia's worldwide popularity is as strong as ever! For more information please visit www.OliviaNewton-John.com, or follow her on Twitter @OliviaNJ and Facebook @OliviaNewtonJohn.