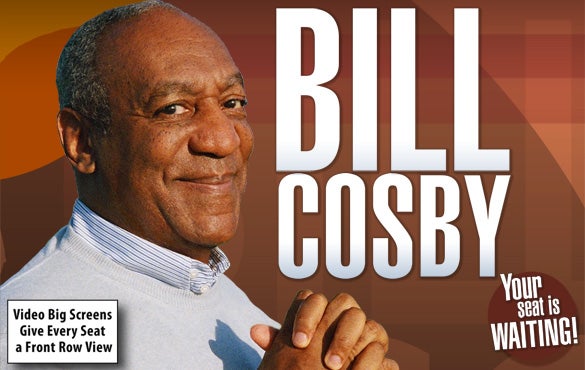 One of America's most beloved comedians of all time, Bill Cosby coming January 21st

8.17.11- One Of America's Most Beloved Comedians Of All Time, Bill Cosby Coming January 21st, Tickets On Sale Friday, August 26th!

Tickets start at $45*. Friends of DPAC members may place their orders on Wednesday, August 24th. Joining the Friends of DPAC is free, and you can register at www.DPACnc.com/friendofdpac. Fans should check local listings for updated tour and ticketing information.

"It’s hard to believe it has been over two years since Bill Cosby sold out two shows as part of DPAC’s first season," says Bob Klaus, GM of DPAC. "Since then I have met so many people who are big fans of both Cosby and DPAC but did not know we even had him here in 2009. These new shows should be a big hit and we’ll do everything we can to make sure no Triangle fans of this legend miss this next appearance.”

One of America’s most beloved comedians of all time, Bill Cosby has captivated generations of fans with his comedy routines, iconic albums and best selling books such as Fatherhood. His comedy transcends age, gender and cultural barriers.

Cosby broke television’s racial barrier with I Spy, becoming the first African American to costar on a television series while winning three consecutive Emmys. He created and produced the Emmy-winning cartoon Fat Albert and the Cosby Kids, which began airing in the 1970s and was made into a film in 2004. The show, based on Cosby’s childhood in Philadelphia, was designed to educate and entertain.

The former Navy serviceman’s illustrious list of accomplishments includes roles on the children’s educational show Electric Company and creating and producing the Emmy award wining Little Bill, which is based on his bestselling book series.

Perhaps Cosby’s greatest contribution to American entertainment and culture is The Cosby Show, about a close-knit, upper class black family. Cosby said his intent was to portray an American family. Time magazine called the show “an encouraging sign of maturity in matters of race.” The Cosby Show dominated the No. One spot for years, earning nearly unanimous critical praise. Life magazine described the program as “a gentle, whimsical, warmhearted” show whose “delicious ordinariness of its pleasures and tribulations has given millions a fresh, laughter-splashed perspective on their own domestic lives.”

Bill Cosby’s next book, I Didn’t Ask to Be Born, But I’m Glad I Was, will be released by the Hachette Book Group in November. Cosby talks about the Bible, being a grandfather and his first love in his humorous and insightful manner.

Cosby’s been busy raising a family, too. He married the former Camille Hanks on January 25, 1964, while she was still a student at the University of Maryland. They raised four daughters (Erika, Erinn, Ensa and Evin) and one son (Ennis) and now have three grandchildren. The family resides in New England. For more information please go to www.billcosby.com.