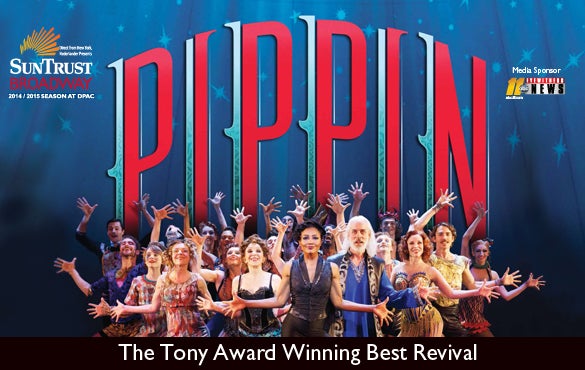 Casting Announced for the U.S. National Tour of PIPPIN

(June 24, 2014) The producers of the Tony Award® winning hit Broadway musical PIPPIN are pleased to announce casting for the U.S. national tour which launches on September 10, 2014 at the Buell Theatre in Denver, CO. PIPPIN will take the stage at DPAC from May 12 through 17 as part of the SunTrust Broadway at DPAC, 2014 / 2015 Season.

Tickets for PIPPIN at DPAC are currently available as part of the SunTrust Broadway, 2014 / 2015 Season package. Prices for the season will vary depending on titles and seats selected, and whether choosing the full eight-show or flexible seven-show package. Tickets for individual shows will go on sale this fall. For more information on SunTrust Broadway at DPAC benefits, visit SunTrustBroadway.com.

The national tour will feature Sasha Allen (a finalist on the 4th season on NBC’s “The Voice”) as Leading Player, Kyle Selig (The Book of Mormon on tour) as Pippin, and the Tony Award® winner John Rubinstein, who created the role of “Pippin” in the 1972 original Broadway production, as Charles. Sabrina Harper (Pippin, original Broadway Revival cast) will be Fastrada and Kristine Reese (Wicked on tour) will be playing Catherine.

Additional casting, including the role of Berthe, will be announced soon.

Directed by Tony Award® winner Diane Paulus, PIPPIN tells the story of a young prince on a death-defying journey to find meaning in his existence. Will he choose a happy but simple life? Or will he risk everything for a singular flash of glory? The show is noted for many Broadway standards including “Magic To Do,” “Corner of the Sky,” “Glory,” “No Time at All,” “Morning Glow,” and “Love Song.”


The original production of PIPPIN, directed by Bob Fosse, premiered on Broadway in 1972. It won five Tony Awards® and five Drama Desk Awards, and ran for close to 2000 performances before closing in 1977. This production of PIPPIN debuted at American Repertory Theater (A.R.T.) in Cambridge, MA where it ran December 5, 2012 to January 20, 2013. It opened on Broadway on April 25, 2013 and went on to win four 2013 Tony Awards® including Best Revival of a Musical and Best Director of a Musical. This production also received Best Revival of a Musical honors from the Drama Desk, Outer Critics Circle and Drama League. The New Broadway Cast Recording for PIPPIN is available on Ghostlight Records.

Join us… for this magical, unforgettable production the New York Times declared “Astonishing!  A PIPPIN for the 21st Century.”