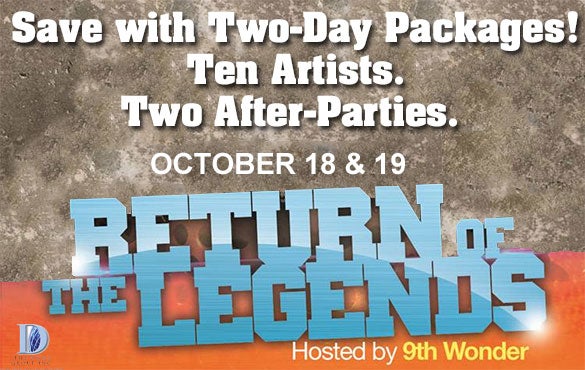 Return of the Legends at DPAC October 18-19

August 20, 2013 (Durham, NC) — Ten hip hop and R&B favorites will perform live in concert as part of The Return of the Legends, a two-night concert and after-party event October 18-19, 2013 at DPAC, Durham Performing Arts Center. Rakim will headline on Friday, October 18 with special guests Pete Rock and CL Smooth, Lords of the Underground, Nice and Smooth, and Camp Lo. Bell Biv Devoe will headline on Saturday, October 19 with special guests EPMD, Brand Nubian, Pharcyde, and DAS EFX. Hosted by Durham’s own 9th Wonder, The Return of the Legends is an official alumni event of North Carolina Central University’s Homecoming weekend. Both nights are presented in partnership with The DOME Group, Inc. and Major Mint Marketing.

“We are pleased to bring this classic hip hop and R&B lineup to the DPAC stage," states Sulaiman Mausi of The DOME Group, Inc. and NCCU alumnus. “The Return of the Legends will be the perfect concert and after-party event for fans who were college students in the 80s and 90s.”