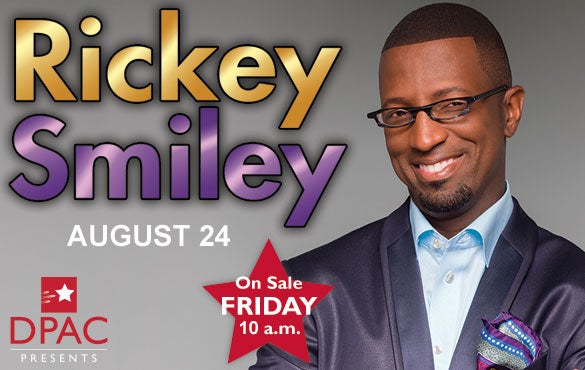 May 28, 2013 (Durham, N.C.) – Funnyman Rickey Smiley is known for making millions laugh for over 20 years. As a well-loved comedian, television host and top-rated, nationally syndicated radio personality, he has earned a reputation for delivering for audiences on stage and over the airwaves. DPAC, Durham Performing Arts Center, fans welcome back Rickey Smiley on August 24, 2013 for his third appearance following two previous sold out performances.

"We've long sought out Rickey Smiley to bring his show back to DPAC. With two previous sellouts here we know Triangle fans love to laugh with Rickey and there is no better place to see comedy than DPAC. This season has seen fifteen of the world's biggest comedy talents on our stage, and our new comedy season that starts this August will be just as fantastic and funny," said Bob Klaus, GM of DPAC.

With the distinct ability to take everyday observations and turn them into comedic gold, Rickey Smiley is a standout in the entertainment world. His audiences are treated to such original characters as "Mrs. Bernice Jenkins,” “Li'l Daryl,” “Joe Willie” and "Beauford." In addition, his comedy shows often include a live band, which he joins to play several instruments and sing.

Smiley has taken the world by storm with his unique blend of comedy and originality. In 2007, he became the host of the  Rickey Smiley Morning Show , one of the funniest and most compelling morning shows in the country. Based in Atlanta, and now in over 50 markets (and still growing), the Rickey Smiley Morning Show is a blend of laughter, community outreach, socio-political awareness and celebrity news.

Smiley is the only comedian who has had the honor of hosting BET’s Comic View for two seasons. Over the years, he has made numerous television and movie appearances. He has released eight comedy CDs containing his hilarious prank phone calls, church announcements and parodies. In addition, Smiley released his DVD Open Casket Sharp, which had premiered on BET as a special in the fall of 2011; it debuted at number one on iTunes.

Smiley and veteran TV producer/director Roger Bobb have teamed up to create The Rickey Smiley Show, a sitcom starring Smiley as a comedian, nationally syndicated radio personality and single father of three--a character a loosely based on his own life. The show’s stories are derived from Rickey’s attempts to raise his children by himself and still have a personal life. Rickey handles situations that arise at the radio station as well, which entail office politics, social issues, celebrity appearances, music and, of course, humor. The Rickey Smiley Morning Show is featured in a daily entertainment news television show Dish Nation which airs weeknights on FOX affiliates.

Rickey Smiley is a graduate of Alabama State University and a proud member of Omega Psi Phi Fraternity, Incorporated. His free time is spent with his loving children in his hometown of Birmingham, Alabama.