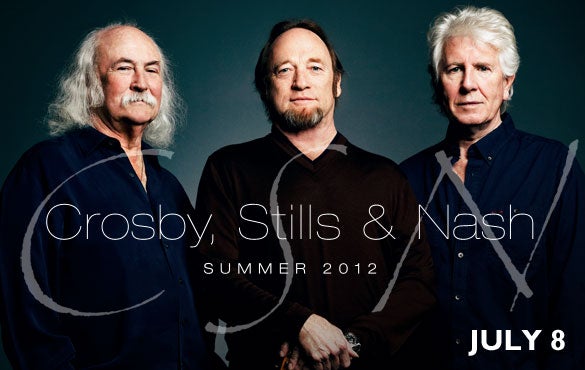 March 19, 2012 (Durham, NC) — Crosby, Stills & Nash (CSN) have announced an extensive U.S. summer tour, beginning early June and continuing through the end of September. The tour will make a stop at Durham Performing Arts Center, DPAC, on July 8, 2012. CSN will be donating $1 from each ticket sold on the U.S. Summer Tour to charity.

Friends of DPAC members may place their orders on Wednesday, April 11th. Joining the Friends of DPAC is free, and you can register at www.DPACnc.com/friendofdpac.

"CS & N have had so many wonderful Triangle appearances over the years. But this is the their first time ever in an intimate theater setting. At DPAC we love great live entertainment experiences and this evening with these Rock and Roll Hall of Famers promises to be very special," said Bob Klaus, GM of DPAC

More than four decades since CSN first harmonized in Laurel Canyon, and played their first-ever concert as a trio at the legendary Woodstock festival, its members continue a creative partnership that is one of the most influential and enduring in music. David Crosby, Stephen Stills, and Graham Nash have each been inducted into the Rock and Roll Hall of Fame two times—once with Crosby, Stills & Nash, and a second time with The Byrds, Buffalo Springfield, and The Hollies, respectively. They have also been inducted into the Songwriter’s Hall of Fame, with the honor recognizing both CSN as a group, and each member as individual solo artists.

CSN’s music first became a cornerstone of rock ‘n roll with the self-titled 1969 debut LP, one of Rolling Stone’s “500 Greatest Albums of All Time.” Ever since—through changing times, various configurations, and acclaimed solo careers—Crosby, Stills & Nash have continued to tour and record as “three together.” www.crosbystillsnash.com.