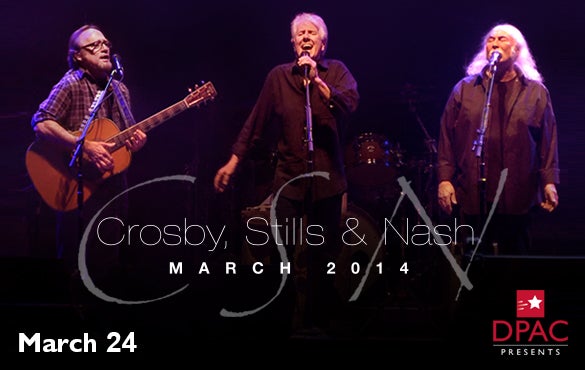 December 10, 2013 (Durham, NC) – Legendary rock trio Crosby, Stills & Nash have announced a series of U.S. concerts for spring 2014 including a return to DPAC, Durham Performing Arts Center, on March 24, 2014. The dates follow their critically acclaimed tour of the U.S., Europe and the U.K. throughout 2013. The group will perform songs from their extensive catalogue, as well as new material from each member. The last performance by Crosby, Stills & Nash at DPAC sold out in July of 2012, and fans have patiently awaited their return.

The tour itinerary runs through March 24, closing with the show at DPAC in Durham, NC. Tour highlights also include the Palace Theatre in Louisville, KY (3/8), Murat Theatre in Indianapolis IN (3/14), Ryman Auditorium in Nashville, TN (3/21), and the Fox Theatre in Atlanta, GA (3/22). Once again, CSN will be accompanied by its backing band featuring: Shane Fontayne (guitar), Steve DiStanislao (drums), Kevin McCormick (bass), James Raymond (keyboards), and Todd Caldwell (organ).

David Crosby, Stephen Stills and Graham Nash unite as “three together” for the March 2014 dates amid a full slate of side and solo projects:

• David Crosby undertakes a solo tour in the U.S. in January and February in support of CROZ, his first solo release in 20 years. The album will be released January 28 on Blue Castle Records, the label Crosby and Nash founded in 2011.
• Stephen Stills recently toured with The Rides, his blues-rock trio with Kenny Wayne Shepherd and Barry Goldberg; their album Can’t Get Enough was released last summer. Carry On, a 4-CD box chronicling Stills’ career—produced by Nash and Joel Bernstein—also came out in 2013.
• Graham Nash recently wrapped a solo tour—followed by an ongoing book tour for his long-awaited autobiography Wild Tales: A Rock & Roll Life, published in September by Crown Publishing Group. Nash also exhibited his artwork and photography throughout 2013.

This March, CSN will be donating $1 per ticket sold to charity. And, excluding VIP and special benefit seat packages thru their official website, all spring tour tickets sold to the general public are priced under $100.  Details and complete tour schedule are available at www.crosbystillsnash.com.

More than four decades since CSN first harmonized in Laurel Canyon, and played its first-ever concert as a trio at the legendary Woodstock festival, its members continue a creative partnership that is one of the most influential and enduring in music. David Crosby, Stephen Stills, and Graham Nash have each been inducted into the Rock and Roll Hall of Fame two times—with Crosby, Stills & Nash, and a second time with The Byrds, Buffalo Springfield, and The Hollies, respectively. They are also in the Songwriter’s Hall of Fame, honored both for CSN as a group, and as individual solo artists.