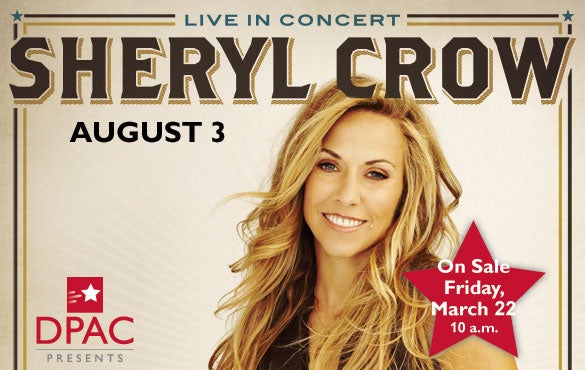 "This won't be Sheryl Crow's first Triangle show, but it could be her best. Nothing in this region beats DPAC for a show like Sheryl's where the focus is on the music. Great acoustics and the most intimate seating of any major venue in the Triangle will help make this one of our hottest tickets ever. Cool Summer nights at DPAC are back!",” said Bob Klaus, GM of DPAC.

1996’s triple platinum Sheryl Crow (#6) earned the Grammy® for Best Rock Album and, for “If It Makes You Happy,” Best Female Rock Vocal Performance. 1998’s platinum The Globe Sessions (#5) also garnered the Best Rock Album Grammy®, as its “Everyday Is A Winding Road” and “My Favorite Mistake” both reached the Pop Top 20.

The new millennium brought 2002’s platinum C’mon C’mon (#2), whose gold “Soak Up The Sun” peaked in the Top 20 and “Steve McQueen” again nabbed her a Best Female Rock Vocal Performance Grammy® . The 2003 greatest hits compilation, the four times platinum The Very Best Of Sheryl Crow, was also a #2 charter, featuring a new recording, a cover of Cat Stevens’ “The First Cut Is The Deepest.” 2005’s platinum Wildflower (#2) featured the duet with Sting, “Always On Your Side.” On her 2008 release, Detours Crow explores both personal and global issues. Crow unveiled her soul stylings on her seventh studio set 100 Miles From Memphis. Growing up in Kennett, Missouri, 100 miles from Memphis, Crow grew up listening to the irresistible soul sounds on the radio coming out of Memphis in the late 60s; Otis Redding, Wilson Pickett, Booker T, Aretha Franklin and early 70s; Al Green, Curtis Mayfield, Marvin Gaye, Sly Stone and Aretha Franklin, all of which shaped the artist Sheryl Crow is today.

Crow is a passionate supporter of a variety of environmental and health-related charities, including The NRDC, The Breast Cancer Research Foundation and The World Food Program. This year saw the opening of the Sheryl Crow Imaging Center in the Pink Lotus Breast Center in Los Angeles.

With a mission of presenting one-of-a-kind live entertainment events, DPAC truly has “something for everyone,” hosting over 200 performances a year including spectacular touring Broadway productions, high-profile concert and comedy events, family shows and the heralded American Dance Festival. Operated under the direction of Nederlander and Professional Facilities Management (PFM), DPAC has twice been listed as the #1 performing arts organization in the region by the Triangle Business Journal.