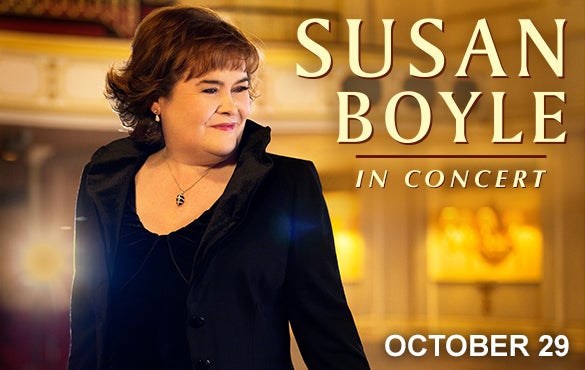 May 29, 2014 (Durham, NC) – Grammy® nominated singing sensation Susan Boyle is embarking on her first U.S. tour this fall including a stop at DPAC, Durham Performing Arts Center, on October 29, 2014. For the very first time in her phenomenally successful career, Susan will be holding her own on American stages performing a sensational and contemporary repertoire of iconic album tracks and never-heard-before classics that will captivate and enthrall her audiences. The exclusive 21-date city tour begins in San Diego, CA on October 8 before touring coast-to-coast, visiting a host of different states including Texas, Arizona, Georgia, and Florida.

"At DPAC we are thrilled to present Susan Boyle on her first ever U.S. tour as her premiere performance in North Carolina. Since the world was introduced to Susan Boyle’s breathtaking voice in 2009, her fans in the U.S. have been waiting to experience her live in concert. As the center for live entertainment in the Triangle, DPAC is the ideal venue to showcase Susan Boyle’s powerhouse vocals,” said Emily McLoughlin, Marketing Director for Concerts and Comedy at DPAC.

Speaking about her first US tour, Susan Boyle said, “This is a brilliant moment for me. I am so very proud to be announcing that I will be performing in my very own tour in the USA. This really is fantastic. The past five years have been incredible and it just keeps getting better. I have spoken so often about wanting to tour America and be able to visit different cities for the first time, I’m so excited. This really will be fantastic and I can’t wait for October. The USA embraced and supported me from the beginning and it really feels like a second home so I can't wait to get on the road and perform there.”

To date, the list of Susan’s successes is in itself compelling reading. 650 Million YouTube hits and the most watched clip of 2009. Two Grammy nominations, over 22 million albums sold, number 1 albums in over 40 countries, and more platinum album certifications than can be counted. Boyle is the first and only person ever to enter the Billboard 200 at number one with a debut album and spend six consecutive weeks at the top, with five albums and a sixth on its way in five years. Susan performed to half a billion people on the final of China’s Got Talent, in addition to headline grabbing performances on the biggest TV shows around the globe. Susan she has sung for the Pope, the Queen, ticked off her wish list of meeting musical and screen idols, and smashed musical records previously held by the Beatles that had remained unchanged since the 1960’s, by achieving two simultaneous number one albums in the US and the UK in 12 months. In 2011 she became the first female artist in 65 years of the UK charts to have three albums go straight to number one in succession. Coupled with a successful autobiography, a musical about her life story, and a sell out UK tour, Susan is an unstoppable force.

Boyle’s accolades in the USA are immense. Signed to Syco/Columbia since 2009, she is the first and only person over 50 to debut at number one with their first album and the first solo act and only female artist to have two albums, I Dreamed A Dream and The Gift at number one in both the UK and USA within one year, a record previously held by The Beatles. Boyle also holds the record for the most pre-release orders ever in Amazon history, with four consecutive albums reaching number one on the top four “Best Sellers Charts,” worldwide.