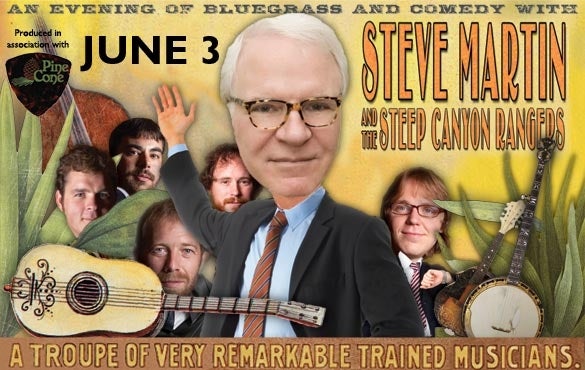 Bluegrass Music's Biggest Night is Back!

Back by popular demand, Steve Martin and the Steep Canyon Rangers will perform at Durham Performing Arts Center, DPAC, on June 3, 2012. This special encore evening of bluegrass music and comedy is produced by DPAC in association with PineCone, the Piedmont Council of Traditional Music.

2011 was a big year for Steve Martin and N.C.'s own Steep Canyon Rangers. Their latest release Rare Bird Alert was nominated for a GRAMMY® award for Best Bluegrass Album, and they were named Entertainer of the Year at the 2011 International Bluegrass Music Association Awards. The record peaked at Number 1 on the Billboard Bluegrass Albums chart. The Big Year - the new movie starring Steve Martin, Jack Black and Owen Wilson - was released on October 14. In 2012, Steep Canyon Rangers promise the April 10 release of their own new album on Rounder Records, Nobody Knows You.