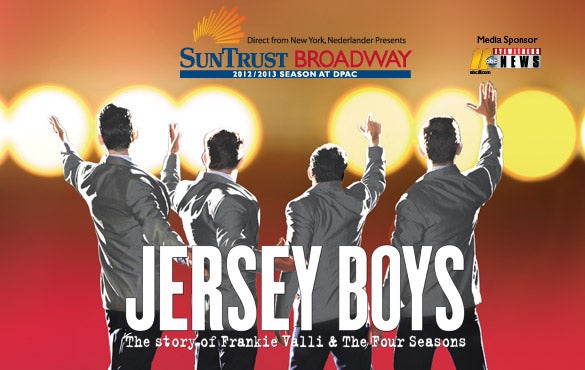 The Must-See Show of the Year!

At 5 p.m. on Thursday, June 21, DPAC will be inviting guests to a special evening event to celebrate the Jersey Boys on-sale early! Cocktails and hors d’oeuvres will be served while guests are invited to an early shot at securing the best seats for the three-week run of Jersey Boys at DPAC.

JERSEY BOYS is part of the SunTrust Broadway, 2012/2013 Season at DPAC presented in Durham.

Catch a sneak peek of Jersey Boys! Log on to www.JerseyBoysTour.com/watch.

JERSEY BOYS is the story of Frankie Valli and The Four Seasons: Frankie Valli, Bob Gaudio, Tommy DeVito and Nick Massi. This is the story of how a group of blue-collar boys from the wrong side of the tracks became one of the biggest American pop music sensations of all time. They wrote their own songs, invented their own sound and sold 175 million records worldwide - all before they were thirty.

JERSEY BOYS will premiere in Durham at DPAC, October 30-November 18. The performance schedule is:

Performance schedule, prices and cast are subject to chance without notice. For more information, please visit www.JerseyBoysTour.com or www.DPACnc.com.