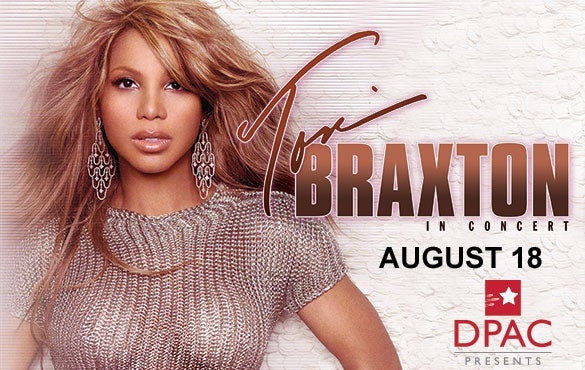 June 10, 2013 (Durham, NC) – DPAC, Durham Performing Arts Center, welcomes the incomparable Toni Braxton to Durham, NC on Sunday, August 18, 2013. Her distinctive sultry vocal blend of R&B, Pop, Jazz and Gospel became an instantaneous international sensation when she came forth with her first solo recording in 1992. Today, with more than 40 million albums sold worldwide and six Grammy® Awards, Toni Braxton is recognized as one of the most outstanding voices of her generation. DPAC presents this concert in partnership with The DOME Group, Inc.

The concert is a milestone for promoter Sulaiman Mausi, president of The DOME Group, Inc. "We're so excited to present fans with this rare opportunity to experience Toni Braxton on the DPAC stage for the first time. Her voice, her performance and her courageous story are one-of-a-kind. This is a show that music lovers have been waiting for, and there's not a doubt that tickets will go fast," said Sulaiman Mausi of The DOME Group, Inc.

Born a preacher’s child and raised in a strict religious household, Braxton’s first professional experience was singing in the church choir. She went on to perform in a group with her four sisters (Traci, Trina, Towanda and Tamar) that was signed to Arista Records. Her talent was recognized by Antonio “L.A.” Reid and Kenneth “Babyface” Edmonds and soon her solo recording career was launched. Her music first came to widespread popularity on the soundtrack of the Eddie Murphy film Boomerang. The resulting Toni Braxton album sold ten million copies worldwide. The album also won her first two Grammys® in 1993 as Best New Artist and Best Female R&B Vocal Performance for “Another Sad Love Long”, and another Grammy® in the same category in 1994 for “Breathe Again.”

The acclaim for her second album Secrets continued her mega success, selling over thirteen million copies in the U.S. and abroad following its July 1996 release. “You’re Makin’ Me High” became Braxton's first across-the-board #1 Billboard Pop and R&B hit single and garnered another Grammy® for Best Female R&B Vocal Performance. Her release of “Un-Break My Heart” followed in the fall of 1996 and was recognized with the coveted Grammy® for Best Female Pop Vocal Performance. It has become her signature song, and ranks as the second top-selling single of all time by a female artist. The next album, The Heat, sold 2 million copies and brought her another million-selling single and the Best Female R&B Vocal Performance Grammy® with “He Wasn’t Man Enough.”

Toni Braxton had successful runs on Broadway starring in Beauty and the Beast and Aida. In 2006, she headlined her own show, Toni Braxton Revealed at the Flamingo Hotel in Las Vegas. The show, which ran through April 2008, was a smash, but in the middle of the extended run she was diagnosed with microvascular angina causing her to cancel the remaining dates. After a recovery period, she took time in 2008 to fulfill her dream of appearing on the top-rated ABC television series Dancing with the Stars. Currently, Braxton is enjoying huge success with her Braxton Family Values reality show on the WE network. Braxton Family Values ranked #1 telecast for women during primetime among all ad-supported cable.