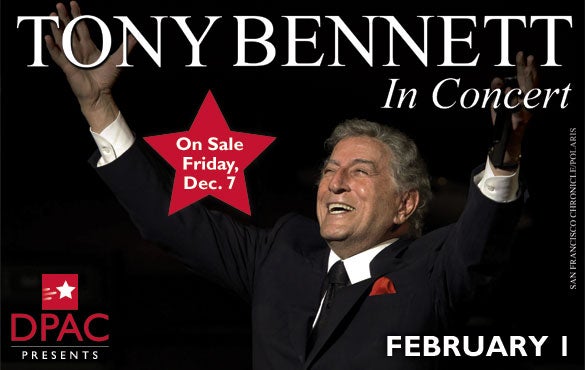 A Night to Remember with Music’s Best

"Fans will not want to miss this once-in-a-lifetime performance of a true national treasure," said Bob Klaus, GM of DPAC.

Tony Bennett has earned his status many times over. He is entering his seventh decade as a recording artist with 17 Grammy® Awards including the Grammy® Lifetime Achievement Award to his credit. Bennett remains the Columbia recording artist with the greatest longevity at the label; when his Duets II cd debuted at #1 (his very first) on the Billboard Album charts in September 2011, it made him the oldest artist to achieve the top spot at age 85.

His 2007 prime-time special, “Tony Bennett: An American Classic,” won seven Emmy Awards. He is a Kennedy Center Honoree and an NEA Jazz Master. Bennett marched alongside Dr. Martin Luther King, Jr. in the 1965 civil rights march to Montgomery and was later honored with the Martin Luther King’s Salute to Greatness Award and the United Nations' 2007 Humanitarian Award.

In addition to performing, he is a successful visual artist, with original paintings featured in the permanent collection at the Smithsonian American Art Museum in Washington, DC. Bennett has published his autobiography, two books of his paintings, his latest release Life is a Gift; he recently released the documentary film, The Zen Of Bennett. For more information please visit www.tonybennett.com.